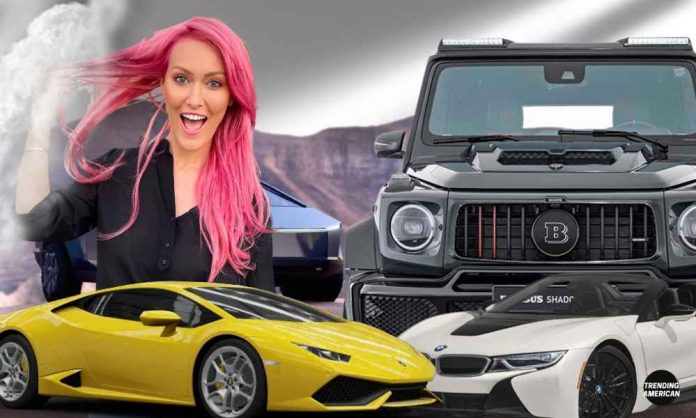 Supercar Blondie cars collection is magnificent. She owns about eight cars. Seven of them are Supercars. Indeed, her cars are worth millions of dollars.

All of us know that Supercar Blondie is a huge Supercar fanatic. She owns supercars like Lamborghini Huracan, Rolls Royce Wraith, Mclaren 720s, and more.

Let us check out each car of Supercar Blondie.

Supercar Blondie’s love for cars started to pay off after she moved to Dubai. Dubai is a place where Lamborghinis and Ferraris are on every street. After a lot of hard work and success, she decided to buy a BMW i8.

She adorned it with gray and black color and neon yellow accent stripes. According to 21motoring.com, the BMW i8 is worth almost $147,500. BMW i8 has a 1.5L Turbocharger inline 3-cylinder Hybrid Engine. It can produce up to 369 horsepower and 570 NM of Torque.

It is an elegant car that blends well in the streets of Dubai. Supercar Blondie started off her car collection with the BMW i8.

Supercar Blondie bought her Lamborghini in 2018. She posted a video of her receiving the car. In that video, she says,

“This is something I’ve wanted for so many years. It’s taken a lot of hard work. But it all paid off.”

In the video, you’ll see how happy and excited she is. She called it her “best Easter present.”

Interestingly, she named her Lambo “Lucy.”

In 2019, she customized her Lucy with black and blue flowers. You’ve got to watch the makeover video to appreciate its beauty. The makeover made the car even more elegant and unique. This outstands the other cars of Supercar Blondie.

According to hotcars.com, Supercar Blondie wanted to sell her Lambo to start a project. Unfortunately, later the project got canceled.

We don’t exactly know whether she sold it or not. So we included this car in our list.

The car, Ferrari 488 Spider, has a beautiful story. Her husband gifted this to her on Valentine’s day 2018. He filled the car with 1000 roses. It was such a beautiful thing to see.

In 2019, Supercar Blondie bought a Tesla Cybertruck. In her video, she goes to the Tesla showroom. She gives a 100$ booking charge and reserves a car.

According to carshtuff.com, the car costs about $39,900. Supercar Blondie says it is super futuristic and affordable. Another reason she bought it is that she loves the technology of Tesla.

Supercar Blondie’s car collection will have a futuristic car in the future.

Supercar Blondie Bought a Rolls Royce Wraith Black Badge in 2020. She introduced her car through a video, as usual.

The exterior and the interior of the Rolls Royce are in Black and white. In the video, she says that she loves the starlight roof feature the most.

She loves the black-and-white interior as she can do anything on the outside.

According to 21motoring.com, The Rolls Royce Wraith Black Badge costs almost $380,000. The Wraith got a 6.6L Twin-Turbocharged V12 engine. It can produce power up to 624 horsepower.

Supercar Blondie explains every detail of the customized car in her video. Indeed, It looks marvelous!

In 2020 Supercar Blondie bought her Mclaren720s. In the reveal video, she says buying a 720s was one of her dreams. She never thought she could buy a Brand New Mclaren 720s.

She thanked her fans wholeheartedly.

This supercar has a Powerful 4.0L Twin-Turbocharged V8 engine. This car can produce up to 755 HP.21motoring.com states that it costs almost $295,073.

This supercar was blue originally. Supercar Blondie redesigned it and made it mat gray with green stripes. It looked insane. Recently she customized it again with a highlighter yellow color. It made the body shape pop up more.

In 2021 Supercar Blondie Bought her first hypercar. The car looks unique and exotic. In the car reveal video, you’ll see that Blondie couldn’t take her eyes off it. She also says she is the “first person in the world to get this car delivered.” Isn’t it crazy?

21motoring.com states that this hypercar costs about $600,000. This car also has a powerful engine and beautiful aerodynamics. Ares Design Modena S1 is one the best cars Supercar Blondie owns.

Supercar Blondie bought a Tiffany custom Brabus G- Wagen in 2022. In the reveal video, you will see the metallic gray body. The body also has some tiffany blue here and there. Supercar Blondie says she loves the contrast between the two colors.

Did You know that Supercar Blondie’s first car was a Mitsubishi lancer?

It is mindblowing to see how she started just with a Lancer. Now Supercar Blondie’s car collection is worth millions of dollars.

“The best thing about driving supercars is the way it makes me feel. It’s so much fun that I often find myself laughing behind the wheel. I’ve always loved driving, even when I was driving my very first car — a Mitsubishi Lancer.” Said Supercar Blondie in an interview with Forbes.

also read: What does Wiz Khalifa do for a living? | Daniel Mac Interview

Supercar Blondie cars are all extravagant. Her most expensive car could be the Ares Design Modena S1. Her favorite one might be the gift from her husband, the Ferrari 488 Spider. She went from a Lancer to BMW, Lamborghini, Tesla, Mclaren, and more. Supercar Blondie’s car collection will expand in the future as well.

Which car will Supercar Blondie’s cars meet next?

How many cars does Supercar Blondie Own?

Does Supercar Blondie own a Lamborghini?

Yes. She has a Lamborghini Huracan.

What is Supercar Blondie’s first car?

Does Supercar Blondie own a Mercedes?

As of now, she doesn’t own a Mercedes.

Which car from Rolls Royce does Supercar Blondie own?

Supercar Blondie was the first person in the world to purchase and receive it.

How much does Supercar Blondie earn per month by being the top-viewed car reviewer on social media?

19 Futuristic Cars Introduced by Supercar Blondie. Find Out What Makes...

How much does Supercar Blondie earn per month by being the...