Did SuperCar Blondie actually get into playboy magazine? 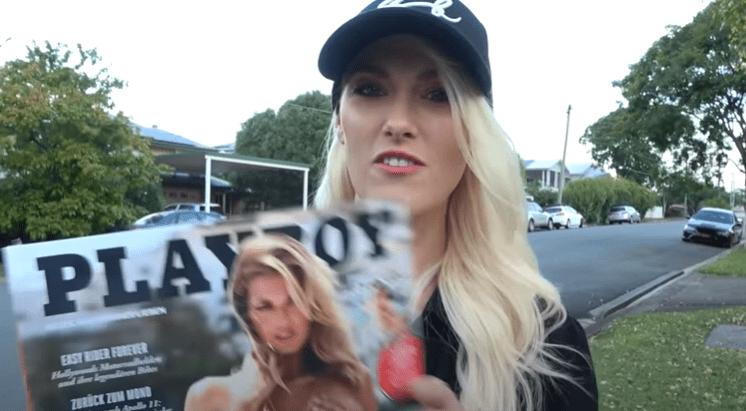 Alexandra Mary Hirschi, better known as the “Supercar Blondie“, is an internet hit among car enthusiasts. Alex Hirschi is a well-known automotive YouTuber and social media figure from Australia. Every time she releases a new video to any of her social media platforms, she is at the top of the trending topics list in the automobile industry.

Also Read: Who is behind the Life of Palos YouTube channel? Why does he blame Supercar Blondie?

Did SuperCar Blondie actually get into playboy magazine?

Recently Supercar Blondie‘s Facebook was recognized as one of the most viewed Facebook on Facebook watch. It came to the top 3 in the charts throughout the entire globe.

Although Alex has always been the most delighted car reviewing person, in 2019 she had herself featured in playboy magazine as well.

But it is not what you’d think, It is not your typical nude art gallery on playboy. Supercar Blondie has made a twist to this.

It is actually a two-page Supercar Blondie feature article. This article is about how she climbed up the ladder of becoming a viral influencer on social media. The article also describes the process she follows when she makes her videos. The article has no nudity whatsoever.

Below is the reveal of her news to her family.

Supercar Blondie was born on September 21, 1985, and her age will be 37 in 2022. Her zodiac sign is Virgo, as she was born in the latter part of September. She was born in Brisbane, Australia, and is a citizen of the country. Additionally, she is Caucasian and a Christian.

Alex has always had a keen interest in autos since she was a child. Her first car was also a Mitsubishi Lancer. In addition, she attended the Queensland University of Technology and finished with a degree in journalism and business, as well. In 2008, she moved to Dubai.

Where Is Supercar Blondie From?

Blondie originally hails from Brisbane, the capital of Queensland, Australia

What is Supercar Blondie’s Real Name?

In her actual life, the real name of Supercar Blondie is Alexandra Mary Darvall, but she prefers to go by her name, Alex Hirschi. Her husband’s surname is Hirschi.

Who is Supercar Blondie Married to?

The husband of Hirschi’s is Nik Hirschi. After their wedding, the pair relocated to Dubai, United Arab Emirates, where they currently reside. In 2018, her husband surprised her with a Ferrari 488spider and a bouquet of red, pink, and white roses on Valentine’s Day as a token of his devotion to her. There is no information available on the couple’s children.

Who are Alexandra Mary Hirschi’s parents?

Hirschi Darvall was born as the third child of Richard (father) and Julie Darvall (mother) in Brisbane, Australia.

Does Supercar Blondie have siblings?

Nina and Kate Darvall are two of her sisters, while Jay is her older brother.

In Dubai, she served as a newsreader and host of a chat program on Dubai Eye 103.8′ for more than nine years. It was here that she spoke with a number of celebrities, including John Travolta, Liam Neeson, and Jake Gyllenhaal. She eventually left the radio show to pursue a full-time career as a social media video creator.

As a social media influencer, she promotes brands like Bugatti and Ferrari. In 2018, she co-hosted the one-off Bugatti L’Or Blanc and La Ferrari Aperta on Germany’s free-to-air TV RTL II’s automobile show GRIP Das Automagazin RTL II. The Batmobile shown in Batman: The Animated Series was driven by Hirschi in the film (1989).

In addition, in 2018, Arabian Business named Alex one of the 50 most influential Arab women. Esquire Magazine Middle East honored her Influencer of the Year in the same year.

How does Supercar Blondie start?

The bubbly Aussie with a passion for vehicles began posting automotive stories to her then 300 Instagram followers in 2015 after starting her career as a broadcast journalist with a radio show in Dubai… Since then, her videos have been viewed more than one billion times, and her audience has grown to millions.

Nik Hirschi is an Australian entrepreneur and former banker. Additionally, Nik Hirschi is well-known as the husband and business partner of Alexandra Mary Hirschi, better known online as “Supercar Blondie.”

According to LinkedIn, when Nathan Bain first began working in 2010. He was employed by five different organizations and had four other occupations. Alex has employed Nathan Bain as a Project Manager and Video Producer.

According to his LinkedIn profile, Sergi Galiano began working in 2011. He has worked for five different companies and held four different positions. Sergi Galiano is Alex’s Creative Director.

How Much Is Supercar Blondie Net worth?

The estimated net worth of Alexandra Mary Hirschi is $17 million. She uses high-performance automobiles as props in her videos. She is well known as “Supercar Blondie” on the internet.

Alex broadcasts videos about supercars and even previously unpublished models on her YouTube channel. February 10, 2018, saw the publication of her Ferrari Valentine’s Delivery video, which has now amassed 23 million views.

Her Facebook videos are viewed by 1.4 billion people every month. One of the world’s fastest-growing vehicle pages is hers.

Facts you may love to know about Alex Hirschi

No. After interacting with so many vehicles, we may assume that she better understands automobiles.

How is Supercar Blondie so rich?

For the most part, this is how Super Car Blondie has amassed her $19.1 million net worth.

How much is Supercar Blondie’s net worth in dollars?

It was previously reported that Alex Hirschi had a net worth of $17 million. But that figure has since risen to $19 million.

Where is Supercar Blondie’s house?

How many cars does Supercar Blondie own?

Currently, she has 8 cars.

Who is Sergi from the Supercar Blondie Team?

Who is behind the Life of Palos YouTube channel? Why does...