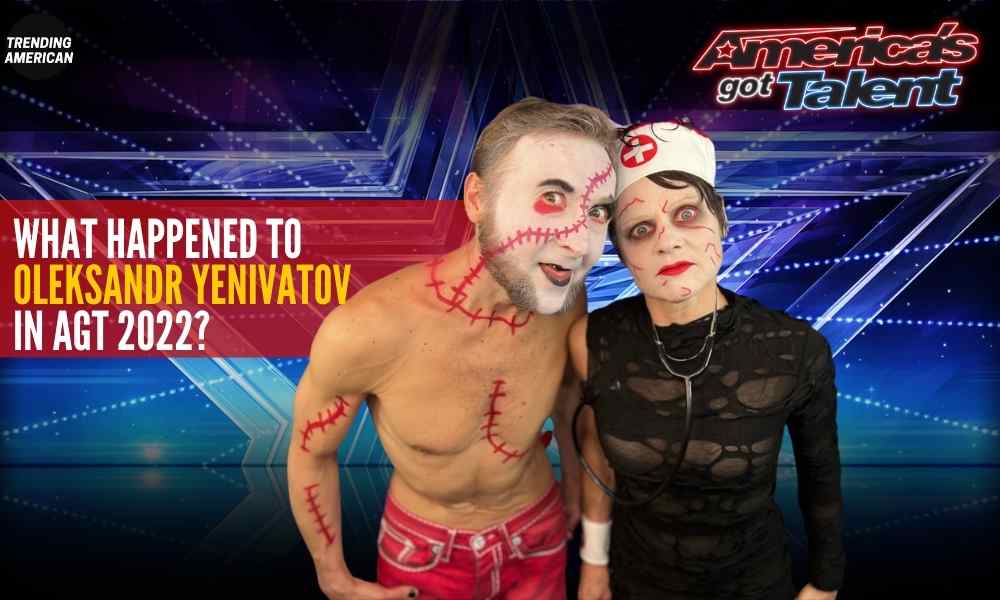 Oleksandr Yenivatov is a proud Ukrainian who came to the AGT with his loving wife. The Ukrainian contortionist who is known as “Sachs De Frog” impressed all the judges and audience with the shocking 360-degree rotational movements of his body parts. Here are some quick facts about Oleksandr’s life, family, career, and net worth.

Oleksandr’s full name is Oleksandr Yenivatov. His nickname is Sacha The Frog. He is from Ukraine. Oleksandr is a Ukranian. But he currently lives in France with his wife Aurelie. AGT Oleksandr attended the Nikouuline Circus in Moscow which is located in Russia.

There is nothing about his age. He is a Circus artist and Contorsionniste Comedy. Now he is working as a Contortionist at GANS GANZ ANDERS Dinnershow Leipzig. Oleksandr is a master in performing contortionist acts.

AGT Oleksandr’s wife is Aurelie Brua Yenivatov. Oleksandr was her teacher and art director. Then it developed into a close relationship and they got married on 6th December 2003.

Aurelie began performing as a circus artist at the age of 27. She was a gymnastics player in his previous career. Aurelie studied at Lycee Jean Mace de Rennes. Now she works as a Double Pole acrobat at Le Cricue with the World’s Performers. There is no information about Oleksandr’s parents, siblings, and friends. Nothing about his children.

What happened to Oleksandr Yenivatov at the AGT audition?

Oleksandr came to the AGT with her wife Aurelie Brua Yenvatov in episode 1703. He performed a shocking contortion act with the help of his wife. While the audition Simon buzzed the act. But after the performance, he changed his decision as the audience forced him to change his mind.  All four judges voted yes to advance to the next round.

What happened to Oleksandr Yenivatov at the AGT Semi-finals?

AGT Oleksandr performed in the semi-finals in Episode 1710. He performed a contortion comedian act with his wife to the theme music from Pulp Fiction. He earned a standing ovation from Simon Cowell. They ended up their performance by kissing each other.

“It’s horrible, it’s weird, it’s disturbing, and it’s fascinating at the same time.” Sofia declares her thoughts on Oleksandr’s highly impressed act. “ I mean you are like the human nutcracker” Heidi added. They earned massive compliments from the judges, but they were unable to get enough voted and were eliminated from the semi-finals. Singer Drake Milligan and saxophonists Avery Dixon were the finalists of the live show semi-finals in week 1.

He is a new Instagram user. AGT Oleksandr Yenivatov has only 697 followers. He has already dropped only 10 posts to it. His wife Aurelie is also on Instagram. She has only 356 followers.  Also, Oleksandr has only 65 followers on Facebook.

“ My main character is Sacha The Frog” he noted his ambition on Facebook. You can follow him on Facebook to know how much experience he has as a Comedian Contortionist. After their semifinal performance, they request the fans to vote for them for their stunning performance. “Please vote for us, vote to help Ukraine” Oleksandr wrote on Facebook.

He is maintaining his YouTube channel with his nickname. Oleksandr has only 75 subscribers. But his debut performance on AGT has passed 652K views on YouTube. Yenivatov’s semi-finals performance has reached over 250K views within 23 hours.

There are no exact figures on their net worth. But AGT Oleksandr may earn a considerable amount of money by performing as a Contortionist comedian in many circus-related events. Surely Oleksandr has a huge net worth as he became many finalists in many talent shows.

Although most of Oleksandr’s facts are in this article, there is nothing much about his parents and net worth. Oleksandr has vast experience in featuring many talents shows all over the world. He carries his country’s pride to the whole world while his country suffers from a disastrous war.

Where is Oleksandr Yenivatov AGT from?

Oleksandr Yenivatov AGT is from Ukraine.

There is no exact information about AGT Oleksandr Yenivatov’s age.