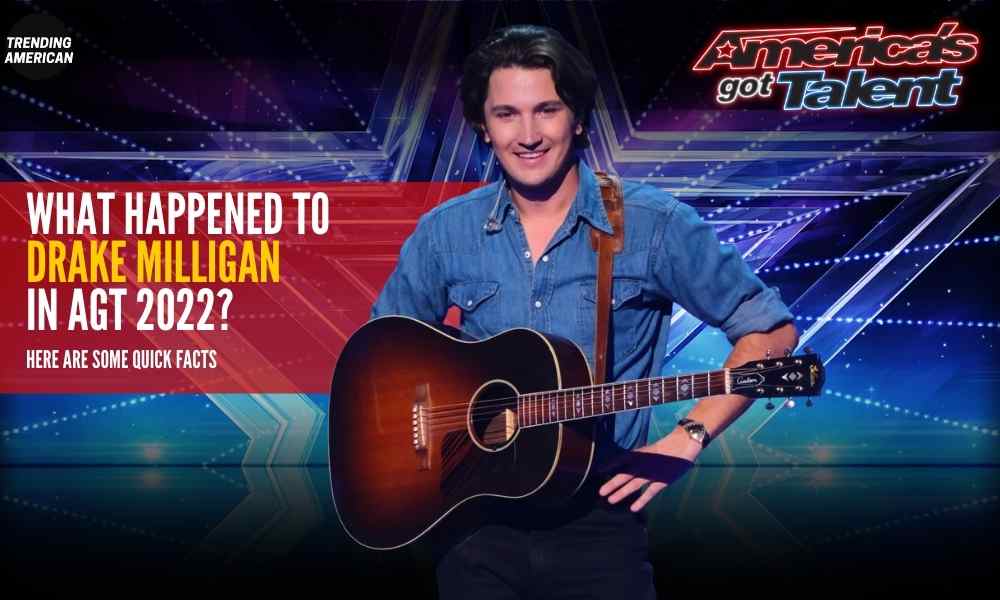 Country singer, Drake Milligan won the hearts of everyone with his sensational voice in AGT season 17. His energetic audition with his band earned a standing ovation from all four judges. He is one of the best upcoming singers who has already released several originals. Here we discuss Milligan’s life, family, relationships, career, and net worth.

Drake’s full name is Drake Milligan. He currently resides in Forth Worth, Texas, United States. Milligan is 24 years of age. He is an American. His religion is Christianity and loves to add something with his musical talents.

AGT Drake started out as an Elvis Impersonator. His birthday is 1st June 1998. He is 5 feet and 8 inches tall. Milligan’s zodiac sign is Gemini. He is a professional country singer, guitarist, and American actor best known for portraying Elvis Presley on the CMT series.

He moved to Nashville, Tennessee during his last years of high school. Drake professionally received training in music. Now with his performances, he is used to calling as “The New Elvis of Country.” AGT Drake has been performing for years now.

His dad runs a scrap yard. He was inspired a lot by his dad’s love of country music. Drake’s mom is a veterinarian. Her name is Angela Milligan. AGT Drake’s marital status is unmarried. There is no news about his affairs and relationship with anyone. Nothing about his siblings.

He received a contract with BBR Music group. Broken Bow Records is an American record label band that specializes in country music. Drake’s works on BBR with Stoney Creek Records.

What happened to Drake Milligan at the AGT audition?

Drake came to the AGT season 17 wearing a guitar with his musical band. The country singer reveals that he believes AGT more than anything as it’s way bigger. He sang one of his original songs called, “Sounds like something I’d do” while playing the guitar and accompanied by his band.

His stunning performance shocked the audience and the judges. “I think you are a hit and you are like the new Elvis of Country” Howie expresses his thoughts on Drake’s debut audition.  Eventually, he received all four yeses to advance to the next round.

What happened to Drake Milligan in the AGT semi-finals?

On a Tuesday night live semi-finals Drake comes with his band members. He proves that he is the new Elvis of country music with his original song “Kiss Goodbye All Night”. His performance was enough to get votes to select the Top 5 acts of the week one. Finally he was able to select top 2 acts with saxaponist Avery Dixon. We can see his performance in AGT 2022 finale.

Drake was a contestant on Season 16 of American Idol. He won the audition by receiving yes votes from all three judges. But Milligan left the Hollywood Round as he thought that he doesn’t ready for that platform. He has played Elvis Presley on a CMT show. AGT singer Drake auditioned for a recording contract with BBR Music Group. Milligan released his debut song called Extended play in July 2021. Then in October 2022, Drake released his Christmas song “Cowgirl for Christmas.” He is the one of AGT 2022 finalist.

His song, “ Kiss Goodbye All Night” made it to No. 1 on iTunes’ Top 100 country songs chart last Wednesday. His debut performance on AGT has over 5.6 million views so far on YouTube. He has his own YouTube channel with over 41.3K subscribers. He has already uploaded 29 performed videos to it.

One of his official music videos called “ Sounds Like Something I’d Do” has over 1 million views on YouTube. Now you can hear Drake Agt’s songs on Apple music.

There are no exact figures on his net worth. But he is a singer and actor who has made a cool amount of money. Drake’s approximate net worth is around $1.5 million. His monthly income is thousands of dollars. AGT Singer Drake is earning a considerable amount of money by performing as a country music singer in many recognized concerts, festivals, and shows. Also, he made money by appearing in a number of tv shows and films.

Although most of AGT Drake’s social media and career facts are in this article, there is nothing much about his family and relationships. It’s clear that he received huge support from his band to rise up as a country singer. With his talents, he has already been named, “ The New Elvis of Country.”

Where is Drake Milligan AGT from?

Drake Milligan AGT is from Fourth Worth, Texas, United States

Who is Drake Milligan?