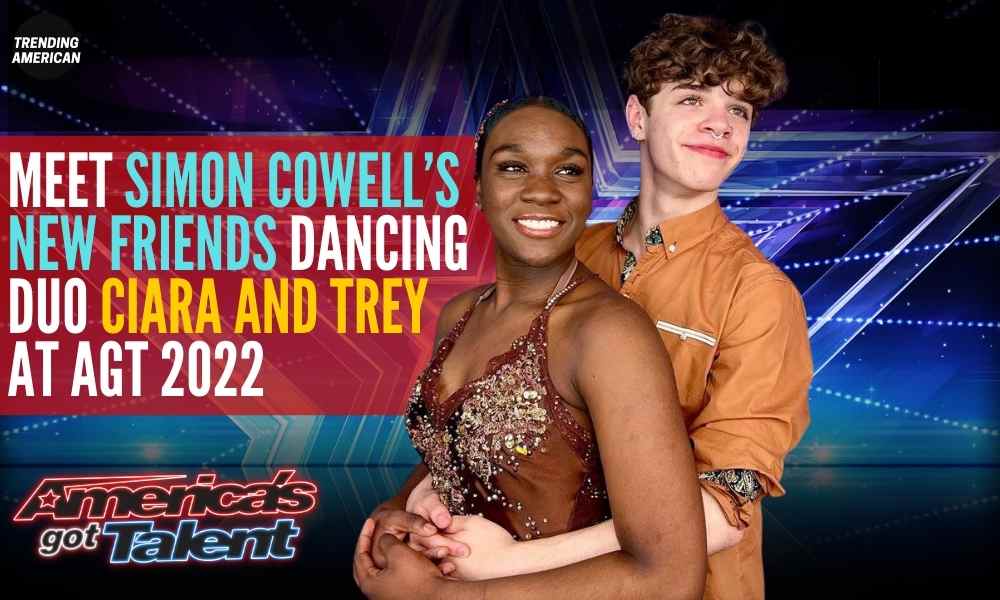 Ciara Hines and Trey Rich are the most recent black and white teen couple to come to the American Got Talent. They both have won so many dancing competitions together in the last few years. Eventually, this young couple becomes Simon Cowell’s new friends after their great audition on 26th July 2022. Here are some interesting facts about Dancing Duo’s biography, career, relationships, and net worth.

AGT Maryland dancers Ciara and Trey are pair of best friends who shocked the world with their amazing dancing skills. They both are from Maryland, United States. AGT Ciara and Tery are dancers in the same dance studio. They are members of the “ Cerdafied Dance Studios.” The two best friends have won so many competitions together. But both dancers are accomplished individually. They frequently trained with the professional American dancer, Delaney Glazer.

Ciara’s full name is Ciara Hines. She is a dance apprentice who completes a variety of contests. Ciara enjoys dancing, acting, singing, and playing instruments like the piano. She started dancing at the age of two. Then Ciara started to do it professionally by the age of ten. Ciara usually practices five hours a day and six days a week. She is studying at Duke Ellington School of Arts.

Trey’s full name is Trey Rich. His birthplace is in Los Angeles, New York. Trey currently resides in Baltimore, Maryland. He participated in the American most popular dancing competition “ ShowStopper.” Pat Brenna is the trainer of Trey Rich. Pat is the director of the “ kids Artistic Revenue Dance Competition.” Trey is also an actor. He will appear soon in a musical drama movie based on a Broadway production.

AGT Ciara’s dad passed away in 2018 unexpectedly from a massive heart attack. There is no information about her mother and other family members.

Are Ciara and Trey dating?

AGT Duo Ciara and Trey came to the AGT stage and gave a brief introduction about themselves. They did their audition for Calum Scott’s “Heaven.” After their performance, Ciara reveals that her dad has passed away in 2018 due to an unexpected heart attack. “ It is not just the boy lifting the girl, it is catching each other, we are always there for each other”

Tery declares the story behind their dance. Heidi and Sofia give two yeses for this young couple. But Mandel says “No” to them. “ You are really good obviously but I do not think you are ready for this stage” he declares his thoughts. Finally, Simon had the chance to decide on their journey on AGT. “I have two new friends for life Yes” Simon helps them to advance to the next round.

AGT Duo Ciara and Trey have won the duet category at America’s number one dance competition, “ Showstopper.” Trey Rich got fourth place in the same competition for the solo round. AGT  Ciara started her professional dancing career at the age of 10. Ciara’s solos won platinum awards at the “On Point Dance Competition”, placing first place in their respective categories. Trey Rich is set to appear in Netflix’s soon-to-be-released film, “13 The Musical.”

Often, they have performed TikTok routines together. Both Trey and Ciara have their own Facebook accounts. But they are not using it regularly to upload their videos or acts. You can watch their performance on the American Got Talent Facebook page. Their audition has passed over 2.3 million views. Ciara has over 6.6K followers on Instagram and She is following back 1104. She has already dropped 113 posts to it.

Ciara and Trey’s Net Worth

There are no exact figures on their net worth. But they surely have a good income from their shows, festivals, and events. Ciara and Trey earned so many prizes by winning many awards and competitions.  We will update you about their net worth in near future.

Although most of their career facts are in this article, there is nothing much about their net worth. No information about their birthdays. But most of Trey’s personal facts are here in this article. But there is less information about Ciara’s family and relationships. AGT dancers Ciara and Trey show some beautifully synchronized moves and natural chemistry behind their moves. Wait until their next performance. We will update you soon.

How old are Ciara and Trey AGT?

Where are Ciara and Trey from?

Ciara and Trey are from Maryland, United States.

What Happened to Voices of our City Choir after AGT 2020? Here are some quick facts.