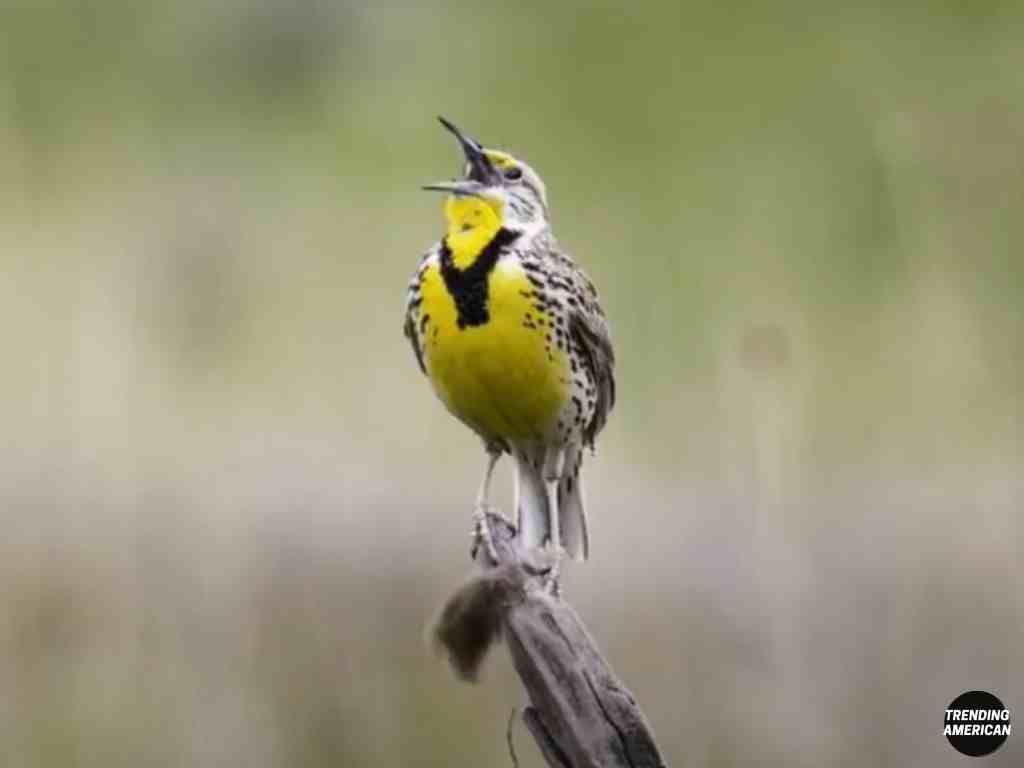 Kansas is the 15th largest and 35th most populous state in the United States. Large plains, rivers, and state parks are prominent features. The American Buffalo is the state animal of Kansas, but what is the Kansas state bird?

What is the Kansas state bird?

In 1925, the Kansas Audubon Society held a statewide schoolchildren’s vote to select a state bird. With approximately 125,000 votes, the Western Meadowlark emerged victorious in the contest, and the bobwhite and the northern Cardinal finished second and third, respectively. In 1937, the state legislature of Kansas made the decision official.

The Western Meadowlark is nearly 9 inches long. An orange-yellow chest with a black V distinguishes its back and wings. In the dead of winter, the Meadowlark’s plumage may be drab. Its long, pointed bill is one of their most distinguishing features.

Both the western and eastern meadowlarks look quite similar. When it comes to their cheeks, Western Meadowlarks have yellower plumage. Their distinctive songs make Meadowlarks distinguished from one another. The song of the Western Meadowlark is a sequence of gurgling notes that go down the scale like those of a flute. In contrast, the eastern Meadowlark’s call is a more straightforward series of whistles.

To attract a mate, the male Meadowlark engages in visual display behaviours. He hops up and down if it doesn’t grab the female’s attention. The nest of the Western Meadowlark is built on the ground. The female locates a depression in the ground and forms it by digging in the dirt with her bill. She lines the dip with soft grass and covers it with grass and plants to create a roof. She then weaves grass into the dome to make it watertight, leaving enough room for an opening. Female lays between three and seven eggs. The eggs take approximately 12 days to hatch. The Meadowlark has two broods every year on average. The male defends the nest by chasing intruders away with great vigor.

Western Meadowlarks live in open grasslands, prairies, meadows, and some agricultural fields ranging from sea level to 10,000 feet. They avoid wooded areas and areas with a lot of shrubs. In the winter, they scavenge for seeds on an almost naked landscape.

What does a meadowlark eat?

Beetles, grasshoppers, crickets, caterpillars, ants, true bugs, and other insects make up the bulk of its food, especially during the summer months, when it eats a lot of spiders, snails, and sowbugs. About one-third of the annual diet comprises seeds and waste grain, which are consumed most frequently in the fall and winter.

Why is the western Meadowlark the state bird of Kansas?

The wild Meadowlark was chosen as the state bird of Kansas, the Sunflower State. This bird made its home in the state’s sunflower fields and sang to the children of the state. The vivid yellow of its tummy and chest is a wonderful match for the sunflower blooms. The Western Meadowlark was chosen as the KS state bird in a poll of the state’s 121,000 schoolchildren held by the Kansas Audubon Society. The Meadowlark garnered 43,895 votes, with the Bobwhite and Cardinal coming in second and third, respectively.

Where do western meadowlarks live?

Western meadowlarks live across much of North America’s west, including parts of Mexico and Canada. They like wide grasslands, meadows, pastures, fields, and the edges of wetlands for their habitat. ‘ Small groups of these birds make the short journey south for the winter.

How many states have the western Meadowlark as their state bird?

Six states. Kentucky was the first state to adopt a state bird, the Northern Cardinal, in 1926, and today every state has one. While the Cardinal was favoured in the east, the plains states preferred the Western Meadowlark. The Western Meadowlark has risen to become the second most popular state bird of Kansas, Nebraska, North Dakota, Wyoming, Montana, and Oregon.