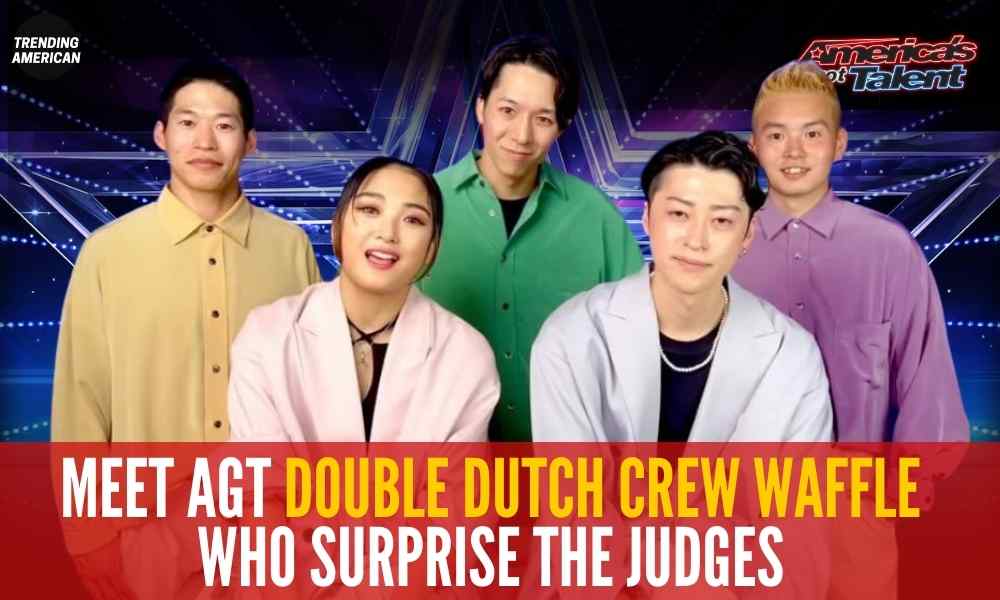 Waffle is a double dutch crew from Tokyo who use the AGT’s stage incredibly during the 2nd of August episode. Their act is totally filled with their gravity-defying jump-rope skills. It is a combination of dance and an acrobatic act. Waffle’s effortless performance delivers a remarkable audition without a single slip-up. Here are some facts about Waffle’s members, family, Careers, and net worth.

AGT Double Dutch Crew Waffle consists of 5 members with a single lady. The Lady is an actress, one a performer, and the other three members are workers in different offices. Members include Taisuke Fukumoto, Elina Mizuno, Kai, Tatsuya, and Daichi Saito. AGT Double dutch crew Waffle is a group that performs a unique jump roping style that is famous in Tokyo, Japan. They have the potential to impress the fans through their quick auditions.

Elina’s full name is Elina Mizuno. She is the only lady in the Double Dutch Crew waffle. AGT Waffle member Elina is a popular Dancer, choreographer, actress, and model. Mizuno is famous for her work in Japanese movies, drama, TV shows, radio, ads, and many other entertainment fields. She is the contestant who revealed more details about them in AGT.

Daichi’s full name is Daichi Saito. He was a member of the jump-rope group, Girdle, and the contestant won the 2019 World Jump rope Championship in Oxford, Norway. Saito is a professional Double Dutch performer. He is a short film director and directed a few short films like Doppel Clothing and Baba Kazuma. He is from Yokohama. Daichi Saito works at Fox Network Group.

Tatsuki’s full name is Tatsuki Fukumoto. He is a Double Dutch World Champion. Tatsuki holds the Guinness World Record for the most double dutch alternate forearm skips done in a row (101). He earned the award on 27th March 2021, in Nagareyama, Chiba, Japan.

Kai is a well-known jump rope performer. He was a member of the Double Dutch group “REGSTYLE.” His former group won the world title for Double Dutch for three consecutive years in 2017, 2018, and 2019.

The 5 member group came to the stage wearing oversized shirts and jackets with sneakers. When judge Heidi heard the group’s name, she said, “Yummy.” The group introduced them as 5 member group from Tokyo, Japan. Some of them work as an actress, and performers and others work in offices.

They performed a complex Double Dutch routine using only two jump ropes. They did their audition for “Lets Groove” by Earth, Wind & fire. The contestants earned a standing ovation from Simon and immense appreciation from the rest of the judges and the fans.

The early release video cuts off before the judges give their judgment. It seems like the act will receive four yeses and advance on to the Judge Cuts round.

One of their contestants has won the 2019 World Jump Rope Championship. In Oxford, Norway with the group Girdle. Tatsuya does modeling and has appeared in several ads. He has participated in the final of the Double Dutch One at the Yokohama Urban Sports Festival.

Tatsuya has won Scene 5 of Double Dutch One with Asuki in2021-2022. Elina Mizuno has starred in a lot of movies, such as Z ISLAND, SoredKE/It, and Gelatin Silver Love.

AGT Waffle’s performance on AGt earned an early release for this week. The video is getting viral and received over 888k views within 22 hours. Caroline Rinny has her own YouTube channel. Waffle Double Dutch Crew has over 926 followers on Facebook. America’s Got Talent has posted Waffle’s audition on their official Facebook page. It has over 1.1 million views and 1.6K shares.

You can follow all 5 members of AGT Waffle on Instagram. Daichi Saito has 1252 followers in it. AGT waffle has its own Instagram account with 511 followers. They just posted only 5 posts in it. But Tatsuya waffle is a famous character on Instagram having over 80.8K followers. He has regularly uploaded posts to it.

Elina Mizuno has over 42.4K followers on Instagram. She has already dropped 554 posts in it. She usually updates about her choreography, dance performances, acting jobs, and many more. Kai reg also has more than 25.6K followers and he is following back 1405. He posted over 1130 posts on Instagram.

There are no exact figures on their net worth. But they earn a large income from their performances in famous festivals, events, shows, and competitions. Also, Double Dutch Waffle members earn a considerable income by performing individually in their own concerts and competitions.

Although most of their career facts are in this article, there is nothing much about Waffle’s member’s personal life, family, and relationships. No information about their net worth. It feels like they have created this group just to participate in the AGT. However, it is very clear that each member is very talented, professional, and experienced in their own field. If Waffles are still alive in the competition, it would be great to see them performing more complex routines with extra ropes.

How many members are in AGT Double Dutch Crew Waffle?

Where is Double Dutch Crew Waffle from?

The Double Dutch Crew Waffle is from Tokyo, Japan.