HomeAGTWhat Happened to Victory Brinker after AGT 2021? Here are some quick...
AGTAGT 2021

What Happened to Victory Brinker after AGT 2021? Here are some quick facts. 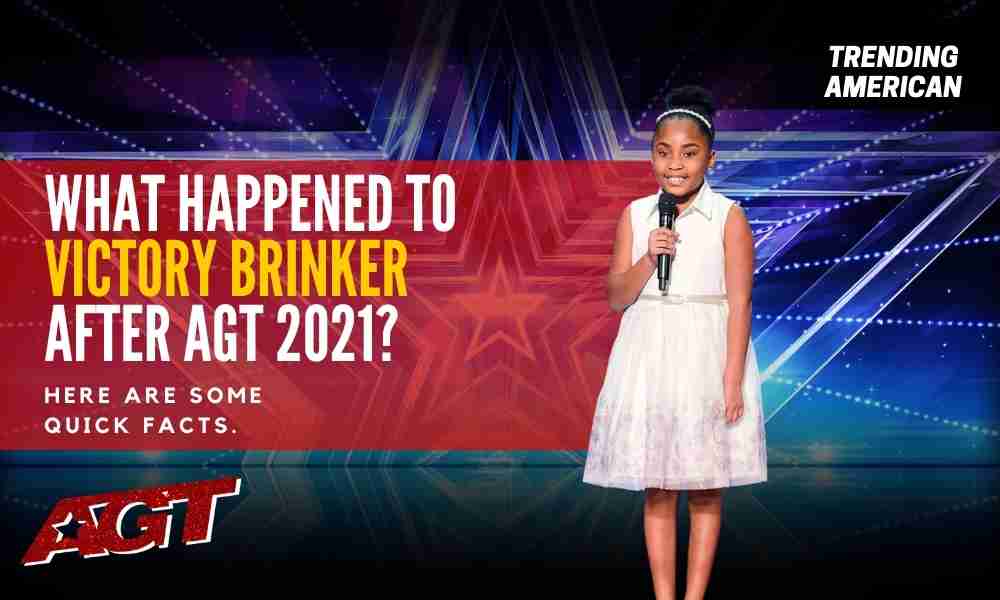 The Little Victory is a very talented girl. She showed her amazing voice in the AGT stage in Season 16. Victory Brinker is an AGT fan favorite. AGT Victory made it to the final 10 Contestants in Season 16. The nine years old opera singer debuted her career on the AGT stage with a history-creating Golden Buzzer. AGT Victory holds the Guinness record as the Youngest opera singer in the world.

Victory Brinker participated in the Americas Got Talent in 2021. She got eliminated from the finals. Here are some facts about her

Where is Victory Brinker now? & what happened to her after AGT?

Victory Brinker is an opera singer and actress. She has 60.8k followers on Instagram. In late 2021 she released a song album named “The Wonder of Christmas”

Victory’s full name is Victory Brinker. She is just 10 years old now. When she came to the AGT she was just 9 years of age. She lives in Latrobe, Pennsylvania with her parents and 10 siblings. She has 6 brothers and 4 sisters. Her birthday is 6th February 2012. Her Zodiac sign is Aquarius. She is the adopted daughter of Christine and Eric. She got the name Victory after five long years.

In addition to singing opera, Victory also speaks seven languages. She can include Italian, Latin, French, German, and many more. Brinker has introduced herself as an old classic singer, opera singer, and Guinness World Record holder. She loves to sing Christmas music and loves Christmas. Her ultimate goal is to break the record for highest vocal note by a child.

Victory Brinker mother’s name is Christine. Father’s name is Eric Brinker. They are very proud parents of 11 children. Her mom is also from a musical family. Christine trained her daughter with her music. Eric and Christine run the Natural Family Wellness Center. It is a holistic health service.

Eric Brinker is also a pastor at the Impact Life Church in Greenburg, Penn. Brinker’s family consists of her parents and 10 siblings. The 10 children in their family currently range in age from 6 to 29. They all supported her since she started as a toddler. They have participated in all her talent shows.

Is victory on AGT adopted?

Yes, she is an adopted girl.

Victory Brinker debuted the AGT on 6th July 2021. Young Brinker created history with her exquisite performance of a French aria. After the performance, all four judges and Terry pressed the Golden Buzzer together. They sent 9 year old opera singer directs to the quarterfinals.

Victory crossed the elimination round and was selected to the live shows directly. She sang “  Casta Diva” from the opera Norma for quarter-finals. The little girl got enough votes to advance to the semi-finals. In the semi-finals, she auditioned “ Nessun Dorma” from the opera Turandot. Howie did not vote for her in the semifinals. But the other three judges vote for her and she earned a chance in the grand finale.

The top 10 acts performed one last night from the Dolby Theatre in Hollywood. She performed in the finals on 14th September 2021. AGT Victory auditioned “Ava Maria” for the very last time. Her performance in the final was much better than in the auditions. Simon said it was in the field of its own and so Victory could possibly win this thing. Eventually, she couldn’t win the AGT. She has to stop in the top 10.

AGT Victory is singing since she was 3 years old. Then she picked up opera at the age of 5. Victory thinks that it was the hardest type of music to learn on earth. AGT Victory is a world record holder for World’s Youngest Opera Singer performs. She did it at the age of 7 years and 314 days.  The performance is called “ Der Holle Rache from Mozart’s The Magic Flute.” She releases her new music video called “ Silent Night.”

Brinker’s performance on the AGT’s stage become very famous as she debuted with a Golden Buzzer. . It is getting viral and more than 14 million views have been viewed. Victory has a YouTube channel called Victory Brinker with 353 subscribers.

You can search her on Twitter at @brinker_victory. You can find Victory on Instagram as @victorybrinker.official. There are about 61.1K followers on Instagram. She has uploaded 189 posts to it. Brinker is maintaining her Facebook page as Victory Brinker. 17033 followers are there with her. Her e-mail address is [email protected]. Victory’s EP “The Wonder of Christmas” can be streamed on Spotify, Apple Music, or the iTunes store.

There are no exact figures on her net worth. But Brinker’s estimated net worth comes to around $ 600K to 800K. Victory is still a child, thus she is dependent on her parents. But she earns a lot of money each year. Her main source of income is from her performances and acting ventures.

Although most of Victory’s facts are in this article, there is nothing much about her net worth.  Maybe her income is handled by her parents as she is just 10 years of age.

Victory Brinker did not win the AGT season 16. She is in the top 10 final contestants.

Where is Victory Brinker from?

Victory Brinker is from Latrobe, Pennsylvania

How old is Victory Brinker now?

Does Victory on AGT have autism?

No, she does not have autism.

Does Victory on AGT have a father?

Her biological father’s name is unknown. But she has a father called Eric Brinker.

also read: What Happened to World Taekwondo after AGT 2021? Here are some quick facts.

What Happened to Usama Siddiquee after AGT 2020? Here are some...