What Happened to Dustin Tavella after AGT 2021? Here are some quick facts. 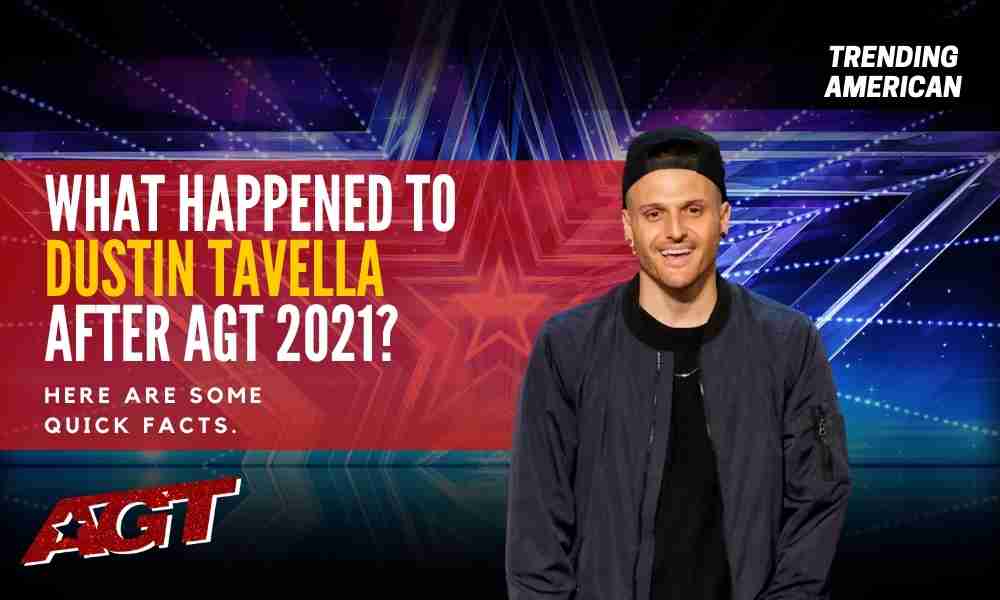 Dustin Tavella is an American magician, singer, and musician. He is the winner of the 16th season of American Got Talent. The magician surprised the judges and viewers with his magic acts and performances. He always did his magical acts by sharing personal stories about adopting his two sons. Dustin Tavella participated in the Americas Got Talent in 2021. He was the winner of the AGT 2021. Here are some facts about him.

Where is Dustin Tavella now? & what happened to him after AGT?

Dustin Tavella is a magician, musician, and also a tv presenter. he has 47.1k followers on Instagram and also 30.5k subscribers on youtube. He is also a presenter of the “Sweet Home Alabama” tv show

Dustin’s full name is Dustin Tavella. He is just 36 years old now. When he came to the AGT he was 35 years of age. He lived in Virginia Beach, Virginia with his family. But now Dustin and his family reside in Las Vegas. Xander is his adopted son of him.

His birthday is 11th April 1986. His birthplace is Philadelphia, Pennsylvania, United States. Dustin is a professional magician and musician. Tavella’s approximate weight is 74kg. His height is 5 feet 10 inches. He took his graduation from Pottsgrove High School. His zodiac sign is Aries.

Dustin Tavella’s mother’s name is Patti Tavella. His dad’s name is unknown. He has a sister called Tara Tavella.

Who is Dustin Tavella’s wife?

Dustin’s wife’s name is Kari Gibson. He married Kari in 2018. They don’t have children in their early life. So, Dustin and Kari adopted Xander when he was just two months old.

Does Dustin Tavella have kids?

Yes, Xander is the first adopted son of Dustin Tavella. Dustin’s son’s full name is Xander Dre Tavella. Dustin and his wife adopted Xander when he was about 2 months old. Eventually, Dustin and Kari adopted a second son. He is called Sylas. Dustin adopted the second during AGT Season 16 filming. He regularly incorporated parenthood into his act.

Dustin debuted on AGT in Episode 1601 on June 2021. He said, “this is the greatest stage ever,” he says. Every time he said, “ his adopted son was the inspiration for what he did.” Tavella shocked the Judges with his magic prediction. Howie Mandel, Heidi Klum, Sofia Vergara, and Simon Cowell all voted “Yes” for him.

In deliberations, AGT Dustin advanced to the top 36. Then he performed a card trick with the assistance of Howie in the quarterfinals. After his incredible performance, all 4 judges gave him standing ovations. Tavella had enough votes to advance to the semifinals in Episode 1610. He defeated Matt Johnson in the Quarterfinals. He did a mentalist act with the people in the Semifinals. Dustin received enough votes to select for the finals instead of Peter Rosalita.

Dustin performed a magical routine act incorporating the audience in episode 1620. In the finals, Dustin received more votes than Northwell Health Nurse Choir to enter the top five. Tavella in the grand finale performed a great magical act with Mat Franco and Rico Rodriguez. He won the season 16 ahead of Josh Blue, Brooke Simpson, Aiden Bryant, and Lea Kyle. AGT Dustin received a huge amount of $ 1000K and a brand new car.

In his early career, Dustin worked in a humanitarian organization. He mentored YouTube programs. In 2013, AGT Dustin released the official music video for “Everybody Knows.” It featured Francia Raisa and Danny Trejo. AGT Dustin released many singles and an EP in 2014.

His one of the emotional auditions on AGT paid tribute to the most magical day of his life. Finally, after passing tough rounds he won season 16 of the AGT show in 2021 at the Luxor Hotel and Casino in Las Vegas.

AGT Dustin is not much active on social media. You can follow Dustin Tavella on Instagram. He has more than 47.2 K followers in it. Dustin has posted 12 posts in it. You can follow Dustin Tavella on Facebook as well. He has 30816 followers on it. Dustin has created his Facebook page on the 8th of February 2010. Tavella is also on Twitter since 2010. AGT Dustin currently has 5394 followers in it.

There are no exact figures on her net worth. Dustin’s approximate net worth is around $6000K in 2022. Dustin won $1000K from the AGT season 16 with a brand new car. He earns a lot of money each year from his magic performances and actings. Also, Tavella earned a considerable amount through his songs and albums.

There are enough facts about Dustin’s life. Dustin has not shared much about his education and background. Also, there is not enough information about his dad. Maybe he does not like revealing more about his family.

Dustin Tavella is the winner of AGT season 16.

Where is Dusti Tavella now?

Where is Dustin Tavella from?

also read: What Happened to Beyond Belief Dance Company after AGT 2021? Here are some quick facts.

What Happened to Josh Blue after AGT 2021? Here are some quick facts.

What Happened to Lea Kyle after AGT 2021? Here are some quick facts.