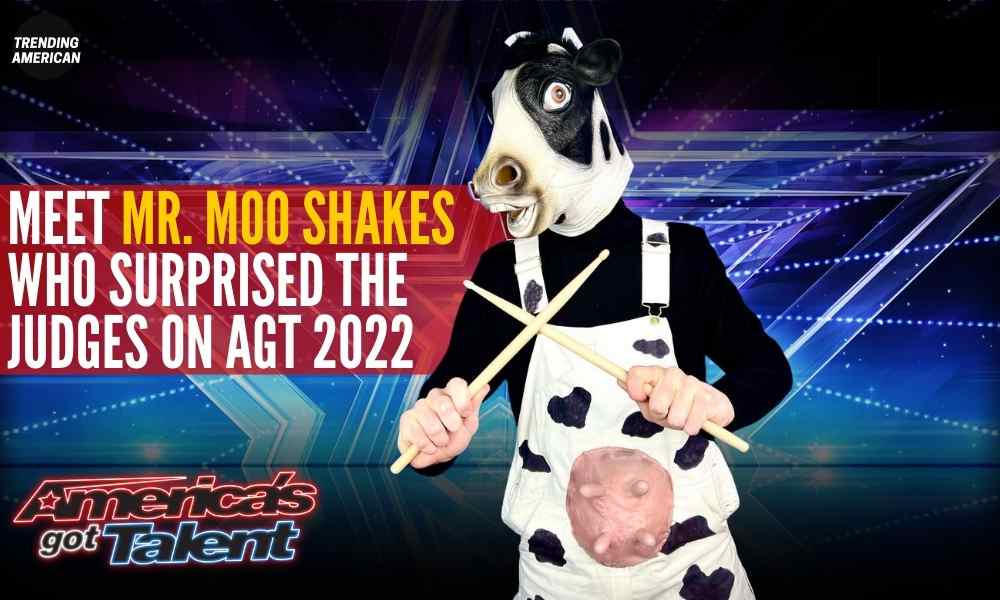 The Seattle musician, Mr. Moo Shakes came to the stage wearing a full cow costume with some milk buckets. He did an unexpected audition by playing drums and using those milk buckets as drums. In the last episode, Mr. Moo Shakes surprises all with “Baby Got Back.” Here are some quick facts about Mr. Moo Shake’s biography, career, family, relationships, and net worth.

Mr. Moo Shakes never reveals his real name to the out. There is nothing about his age, birthday, education qualification, day job, religion, and many more. You cannot identify him in real life as he never reveals his face to his fans.

AGT Mr. Moo Shakes came to the show wearing like a cow. Then Simon asked about his dream. “ My big dream is to have my own show in Las Vegas” he replied and earned huge appreciation from the audience. Mr. Moo shocked everyone as he performed as a drummer by using milk buckets instead of drums.

After the audition, Simon Said that we have never judged a cow who played drums before, and it was unexpected. “I feel like most drummers could do this, I don’t think it is very hard to do this type of thing” Heidi expresses her aversion to the act. Eventually, He got only three yeses, but not from Heidi Clum who was not satisfied with that performance.

Feel like he is trying to initiate his career as a drummer in cow costume to follow his dreams. AGT drummer Mr. Moo Shakes aspired to be the gifted “cool” cow. He did his first recognized stage show on AGT stage for Sir Mixx-a-Lot’s “Baby Got Back.”

His dream is to have his own show in Las Vegas to be the first cow on the strip. “Don’t follow the herd, Don’t limit yourself to the dairy farm” that is the advice he gives to anyone who hides their own talents due to a day job.

“Everyone thinks a cow’s dream is to jump over the moon, but mine is to be a star” Mr. Moo declared his thoughts about his dreams on social media. Mr. Moo’s audition has been watched by over 431K viewers on YouTube and it’s still counting in large numbers.

America’s Got Talent official page has uploaded his audition and it has amassed more than 401K views right now with  196 shares. AGT drummer Mr. Moo has only 880 followers on Instagram. He has only posted 10 posts in it. Mr. Moo has appreciated Jim Dever on Instagram in providing an interview with the program @king5evening.

There is no exact figure for his net worth. Mr. Moo Shakes AGT may earn a considerable amount of money by performing as a drummer in a cow costume. Maybe he is doing a day job relating to farming. But, there is no exact information about it.

AGT dancer Penny is the only contestant who came to the AGT in season 17 wearing a cow costume. But many numbers of AGT fans criticize Mr. Moo’s win last Tuesday as they think they can see better acts like this on the streets of Boston.

There is no information about Mr. Moo Shakes’ age.

Where is AGT Mr. Moo Shakes from?

AGT Mr. Moo Shakes is from Washington. He says he came to the AGT from a dairy farm.

Who is Mr. Moo Shakes AGT?

Mr. Moo Shakes is a drummer who is wearing a cow costume.