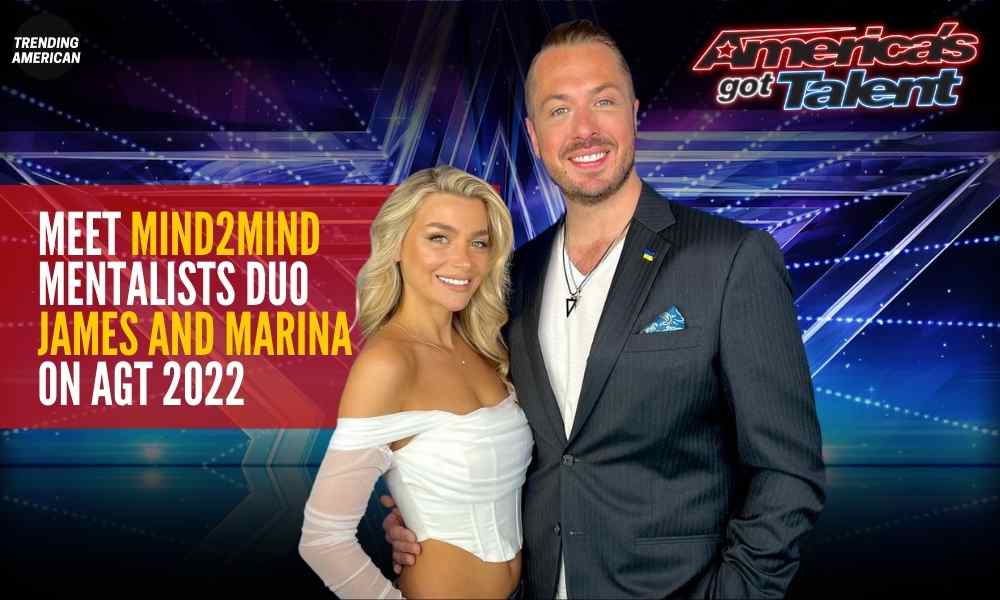 It was a spectacular debut performance from the mentalist duo MindtoMind aka James and Marina on AGT last week. Both James and Marina impress the judges and the live audience with their mind-reading abilities. They have the ability to enchant audiences with a range of mind readings and magical illusions. Here are some quick facts about the Mentalist duo’s biography, family, relationships, career, and net worth.

James and Marina have been together for almost 5 years. They got married just over a year. AGT Mentalist duo Mind2Mind currently lives in Dubai, UAE. Both of them are professional mentalists. Both of them have the potential and the ability to read each other’s minds by connecting each other through their eyes. Mind2Minds’ is the way how they expose to the world.

James’ full name is James Harrington. His wife is Marina Liani. He is an Englishman. He was born in England. James is a professional mentalist, magician, and mind reader. He is a specialist in doing close-up magic for a small group of audiences. He has a 15 years long career. James has performed in over 28 countries at parties, events, and shows.

Marina’s full name is Marina Liani Harington. She married James Harrington on 19th December 2020. Marina is a pianist who performed in her school. She shifted to modeling and as an event MC for huge multinational companies in Dubai. Liani is a Ukraine lady. Her birthday is 17th January. She loves it very much for dogs.

James introduced themselves as mentalists who read the minds. They did a long-distance mind reading. His partner Marina was outside the AGT with Terry and she predicts Sofia’s mobile’s battery percentage very accurately as 49%.

Then again Marina correctly read a past memory of a fan by connecting with Heidi’s mind. After the audition, Sofia says, “You guys just did it fascinating, it was mysterious, that was spectacular.” All the judges were shocked after the audition.

“ I love the presentation, I love the fact that you did from outside which is one more level to it” Howie declares his compliments, and then the audience went crazy on it. Eventually, James and Marina received four confident yeses and advance to the judge cut round.

The AGT mentalist duo auditioned for the 10th season of Ukraine’s Got Talent in 2021. They earned the Golden Buzzer from judge Slava Frolova and reached the finals.

Both James and Marina appeared on Britain’s Got Talent in 2019. But they missed out on their spot in the semi-finals of the competition. The Mentalist duo has also won the Prestige Awards Live entertainment Specialist of the Year for 2020-21.

Mind2Mind’s Psychic powers have already received over 717K views on YouTube for their debut audition on AGT. James Harrington has over 8.9K followers on Facebook. America’s Got Talent has shared Mind2Mind’s audition on their official Facebook page and it has over 807K views and 218 shares right now. Their official Facebook has 1163 followers. Marina maintains her Facebook account as Marina Liani-Harington. She has nearly 1K followers. Marina used to share more related information about dogs than anything.

Mind2Mind has over 6.5K followers on Instagram. On Instagram, they regularly update their gigs, shows, mind reading skills, and many more. They have already dropped 172 posts in it. AGT has shared Mind2Mind’s audition on Instagram and it has over 8.5K likes.

James and Marina’s Net Worth

There are no exact figures on their net worth. But they are professionals as Magicians and mentalists. Surely they earned a huge amount of money from their acts and performances. As they are competitors they could have more prices from those world famous competitions. They currently spend a luxury life in Dubai, UAE.  We will update you about their exact net worth in near future.

Although most of the Mentalist Duo’s career and social media facts are in this article, there is nothing much about their personal life, family, and net worth. No information about their families. They are the latest duo who is able to look through the eyes of others without the need of eyesight, technology, and amusing verbal codes. Both of them are very special and unique as their act includes a rare form of mentalism called the “Second Sight.” Stay tuned for more information!

How old are Mentalist duo James and Marina?

There is no exact information on the AGT mentalist duo’s age.

Where are the Mind2Minds’ mentalist duo from?

Where is the Mind2Minds’mentalist duo originally from?

James Harrington is from the United Kingdom and Marina Liani is from Ukraine.

also read: Get to know about Sword Swallower Auzzy Blood from AGT 2022

Meet Mr. Moo Shakes  who surprised the judges on AGT 2022