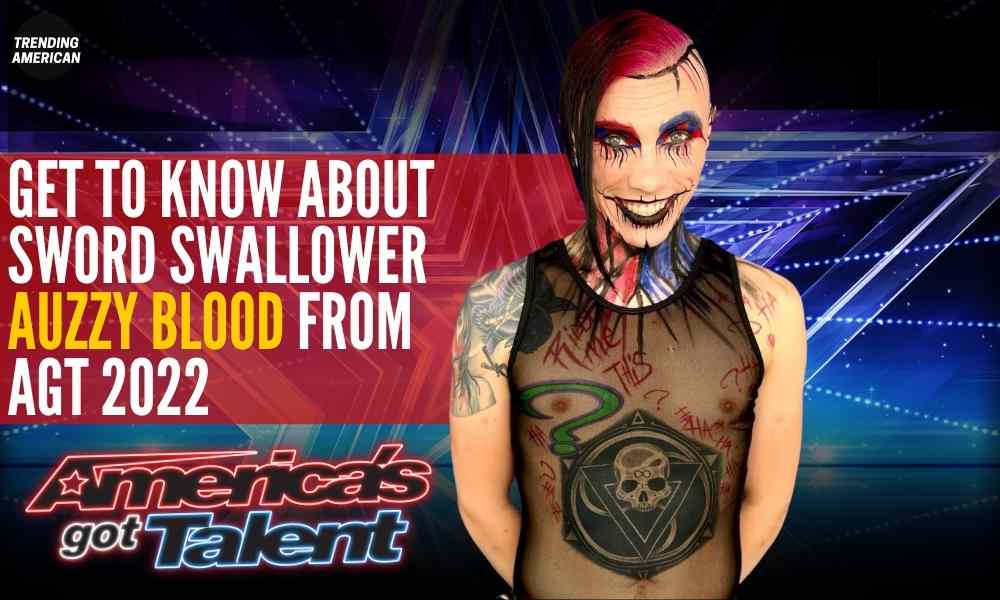 Season 17 has already witnessed a number of acts that stretch the boundaries of human endurance. In the case of the Balla Brothers, Viviana Rossi, and Zeno Sputafuoco, nothing is impossible. Shock value appears to be increasing as the season develops, as well. As a performer known for his horrifying antics, Auzzy Blood will make you reevaluate your assumptions about human psychology and physicality. What if I told you there was a lot more to it? Find out for yourself by reading on!

Austin Punton, better known as Auzzy Blood, is a performer noted for his daring acts that test the limits of human endurance. For example, Blood has been known to swallow a sword whole, raise an entire eye socket by its lids, or even use his face to drive a corkscrew through it. While performing, Blood takes risks with his own physical ability, resulting in death-defying deeds as well as a sense of awe in the audience.

Guy has a bio on Facebook that states, “If you’re afraid of the strange, bizarre & macabre, then I just may be your WORST Nightmare… I push the boundaries of my mind & body in unthinkable ways. Performing dangerous acts & stunts that most would find to be unbearably painful & Impossible.”

His family remains a mystery to the public. On the other hand, he routinely posts pictures of himself and his girlfriend Cat Black, whom he refers to as his “ghoulish love.”

The judges on “America’s Got Talent” were treated to a spectacular performance. On Tuesday’s program, they were introduced to Auzzy Blood, a goth performer with “scary” tattoos and a gothic style.

“I basically like to hazard my life for other people’s pleasure, to show other people you can genuinely accomplish everything you put your mind to,” said Auzzy, who emphasized that he’s from Las Vegas, not Australia.

Auzzy began his performance by grabbing a sword and swallowing it, and then getting down on the floor and doing some really athletic pushups, all while the handle of the sword was still protruding from his mouth.

A post shared by America's Got Talent – AGT (@agt)

About halfway through, he summoned Howie Mandel to the stage and had him assist him in slitting the throat of one of the performers with the sword.

After a brief pause, Mandel stated, “Oh, it’s stuck,” before pulling the blade free with the words, “I can feel it.” The judge walked back to the desk and stated, “I’m going to throw up.”

“What would we see next if you advanced to the next round?” asked Simon Cowell. Because I have seen that before.”

Cowell agreed to Auzzy’s suggestion that “How about next time we smash a world record on television.”

He added: “I’m disgusted and entertained at the same time. When it comes to sideshows, you’re like “Beetlejuice.”

In the end, Auzzy received four yes votes, advancing him to the next stage of the competition.

Gig Salad says he lives in Las Vegas and can be booked for shows where he performs “stunts like the Human Blockhead using meat hooks and enormous corkscrews, eye socket lifting, glass walking, sword swallowing and much more!” He has also performed with Cirque Du Soleil, among others.

Also, he has worked on ‘Welcome to Grindhaus!’ and was featured in ‘Anxiety Performance or How I Stole My Soul Back from Los Angeles.’

Auzzy has not exposed his net worth to the public. When new information becomes available, we’ll be sure to post it here.

Where is Auzzy Blood from?

Auzzy is from Las Vegas

How old is Auzzy Blood?

The exact age of Auzzy Blood is a mystery. In the meantime, stay tuned for an update.

What is Auzzy Blood real name?