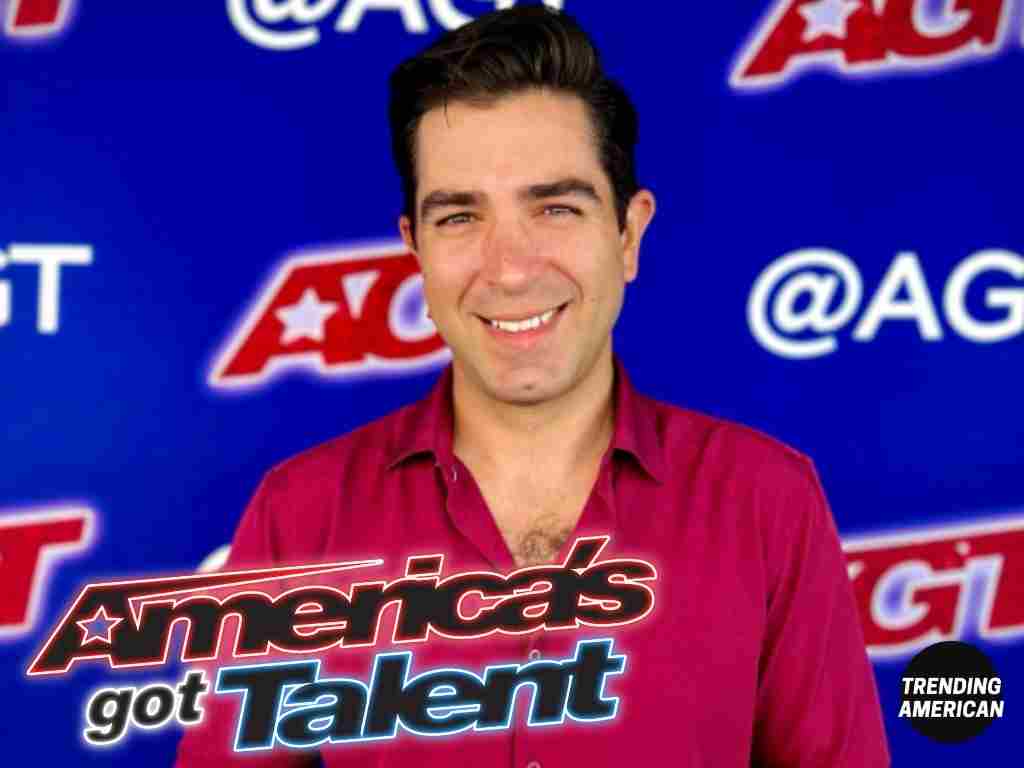 Auditioning for America’s Got Talent on Tuesday, June 21, 2022, Justin Rupple wowed the judges with his spot-on impersonation of famous voices. It’s safe to say that Justin Rupple is an excellent performer. His work in Hollywood films and television has earned him widespread acclaim.

AGT Justin Rupple was born in Los Angeles in 1988, making him 34 years old now. Rupple is a performer of both on-screen and off-stage roles.

He attended Washington State University and graduated from the Edward R. Murrow School of Communications with a bachelor’s degree in journalism.

He had a strong preference for watching television and movies from an early age. As a result, he was able to develop fantastic acting skills that have served him well in the film and on stage. Like any journey of a thousand miles begins with a single step, he started his acting career in Hollywood with a series of commercials and other minor roles.

Rupple’s “throuple” relationship is also making news. Rupple and his wife, Katy Rupple, are involved in a polyamorous relationship with Claire Thornhill. In 2006, while appearing at one of his comedy concerts, Rupple met his future wife, Katy. 2013 saw the beginning of their new life; their marriage.

A few years after they married, Katie said she wanted to discover her bisexual side. The pair sought Rupple’s college classmate Claire after lengthy negotiations. In an interview with The Mirror, Claire said, “At first, it was a surprise as I had never been approached like this before.” Despite this, I was happy to be surprised because I’ve always had feelings for both men and women. So Justin is the only polyamorous guy on AGT 2022.

What Happened at America’s Got Talent Auditions?

As seen on America’s Got Talent, Season 17 Auditions, Tuesday, June 21, 2022, Justin Rupple dazzles with his celebrity voice impressions. After getting four yeses from the panel of judges, Rupple advances to the next phase of the competition.

Justin is a voice actor and impressionist based out of Los Angeles. This comedian from Los Angeles has a degree in communications from Washington State University’s Edward R. Murrow School of Journalism. When he finished college, he went to work at Seattle’s KIRO radio. In the early years of 2006, Rupple, a natural performer who craved an audience, tried his hand at stand-up comedy. Late in 2008, Rupple received his big break when The Parlor Live Comedy Club in Los Angeles saw him perform at the now-defunct Giggles Comedy Club in Seattle. His two years as the club’s sole house host included six shows each week of entertaining patrons.

In 2010, Rupple relocated to Los Angeles to pursue fame and fortune. After suffering through numerous setbacks, Rupple finally found success when he was cast in the Liam Neeson film “Opposite Chromite.”

In 2012, Justin made a guest appearance on an episode of All The Wrong Notes. 2014 saw him as Sterling in the pilot for Semi-Famous, a drunk bar patron in an episode of Partners, and Jerry Dowdell in Scorpion. In 2015, he played both Justin from What If Catcalls Were Cheeseburgers? and Sefiullah from Before and After Uber. His role as the announcer on the TV show Zombie Whisperer spanned the years 2012–2015.

In 2016, Justin participated in an episode of Standup and Away! with Brian Regan and also played Alexander Haig in the film Operation Chromite.

He voiced Tuffnut Thorston in both How to Train Your Dragon: The Hidden World and the TV short that accompanied it, How to Train Your Dragon: Homecoming, both released in 2019. He also provided his voice for Rob in Disney’s Short Flyby and a Komodo Dragon in an episode of Disney’s Doc McStuffins this year. In 2022, before he tried out for AGT, he was cast as James in the TV series Bee Man.

Actor and voice actor Justin Rupple of the United States has a net worth of $80,000 to $85,000. However, take into account that this is only a rough estimate of his wealth. The full extent of his wealth remains unknown.

If you’re on Instagram, you can find Justin Rupple under the handle @therupple. He has 198 Instagram posts and 4,197 followers.

He also shared a humorous video he made and talked about his work on Instagram. The Twitter account @TheRupple is where you can find Justin’s musings.

He joined Twitter in May of 2009 and currently has 1,655 followers. Since he appeared on American Got Talent, the general public has highly known him. Rupple’s short parody cut can be found on his YouTube channel, also called Justin Rupple.

How tall is Justin Rupple?

How old is Justin Rupple?

Since his birth in 1988, Justin Rupple is currently 34 years old.

Everything about Funkanometry Dance Duo at AGT 2002