HomeAGTWhat Happened to Roberta Battaglia after AGT 2020? Here are some quick...
AGTAGT 2020

What Happened to Roberta Battaglia after AGT 2020? Here are some quick facts. 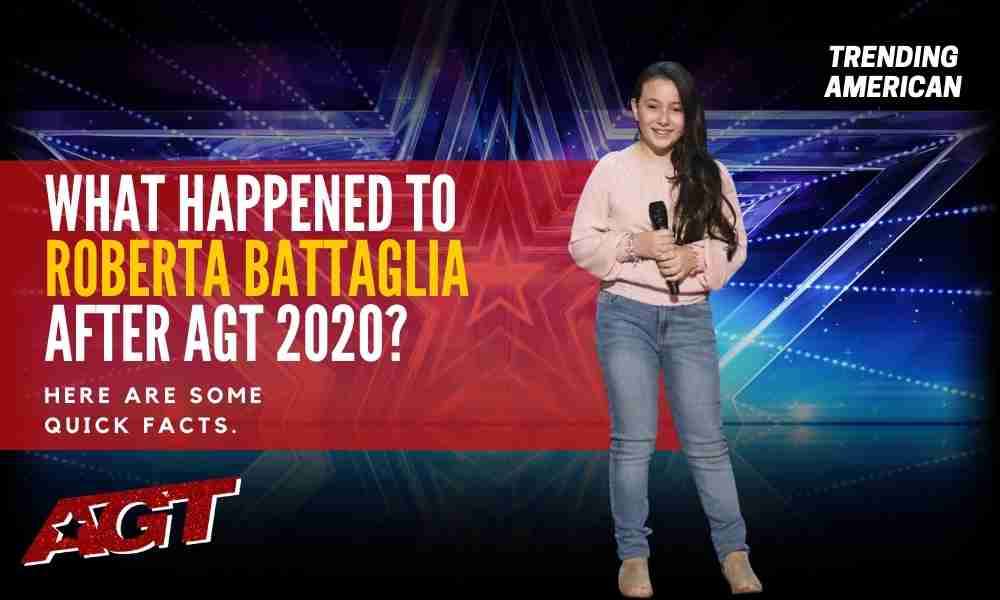 The young and promising Roberta Battaglia is best known for participating in the 15th season of American’s Got Talent, where she placed in the top four. She was also a recipient of Sofia Vergara’s Golden Buzzers.

Roberta Battaglia participated in the Americas Got Talent on 2020. She got eliminated from the finals. Here are some facts about her

Roberta Battaglia is a singer. She has 74.4k followers on Instagram. After AGT she is still engaged in her studies.

On August 22, 2009, Roberta Battaglia was born in Toronto, Canada. Leo was her zodiac sign at birth; she is 12 years old. Her race is mixed Canadian-Italian, and she is of Canadian nationality. Now that she has decided to focus on her education, she is actively pursuing her academic goals.

Roberta B. comes from a musically talented and well-established Italian family in Toronto, Canada. Her dad Alessandro moved to Toronto in 2008, and she was born the following year. Her father has been a major musical inspiration and coach, and his wife is a huge fan. Her great-grandfather taught music, and her grandfather played the piano and saxophone, so it’s safe to assume that she inherited a love of music from them.

Where is Roberta Battaglia now? & what happened to her after AGT?

Roberta Battaglia is a singer. She has 74.4k followers on Instagram. After AGT she is still engaged in her studies.

What is Roberta Battaglia doing now?

At this point in her life, Roberta B. is still a young teen and, despite entering middle school, is committed to finishing her elementary schooling. She is an ordinary student who enjoys participating in school musical competitions. In the near future, she will most likely complete her education in a music conservatory.

What happened to Roberta Battaglia on America’s got talent?

In Episode 1502, Roberta performed a cover of “Shallow” by Lady Gaga and Bradley Cooper for her audition. Roberta was so impressive that even Sofia Vergara used her Golden Buzzer to advance her to the next round.

In Season 15, Episode 17, Roberta sang “What About Us” by Pink for the Semifinals performance. A standing ovation was given to her by Howie Mandel, Heidi Klum, and Sofia Vergara. In Episode 1518, Roberta beat Shaquira McGrath in the voting and moved on to the Finals.

In Finals Episode 1521, Roberta sang “Scars to Your Beautiful” by Alessia Cara. The audience, including Howie Mandel, Heidi Klum, and Sofia Vergara, stood to applaud her.

Roberta, Kenadi Dodds, and special guests JP Saxe and Julia Michaels sang “If The World Was Ending” for the season finale in Episode 1522. Her vote total was high enough to displace Kenadi Dodds’ and put her in the top five. Roberta placed fourth overall, above Alan Silva but below Brandon Leake, Broken Roots, and Cristina Rae.

At age three, Roberta began performing professionally with her father, Alessandro Battaglia, as a vocalist. They have performed together at a number of community and charitable events. However, her audition for “America’s Got Talent” propelled her into the spotlight.

Roberta has an impressive fortune. Our investigation into Roberta wealth led us to estimate that she is worth something in the neighborhood of $100,000.

No. Roberta is only 11; therefore, she is not keen on dating. Similarly, she has stopped worrying about herself and concentrates on her career.

Where is Roberta Battaglia from?

How old is Roberta Battaglia now?

also read: What Happened to Shaquira McGrath after AGT 2020? Here are some quick facts.

What Happened to The Canine Stars after AGT 2021? Here are...