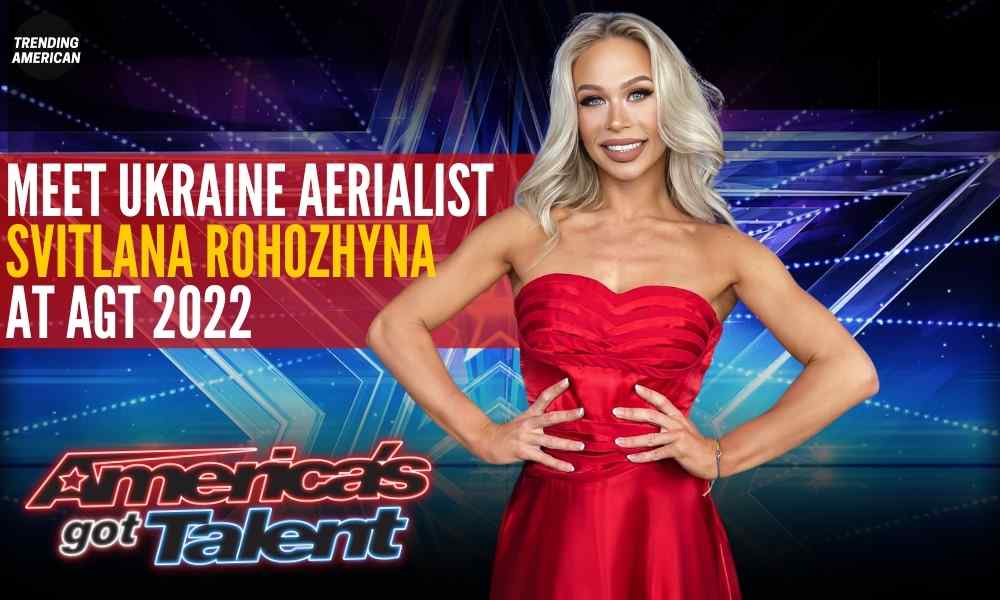 This isn’t the first time that one of the contestants has visited Las Vegas. Introducing Svitlana Rohozhyna, an aerialist with a diverse range of skills who performs with the WOW Vegas Show and will now compete on NBC’s ‘America’s Got Talent.’

‘America’s Got Talent,’ now in its 17th season, is raising the heat when it comes to standout performances. As the season progresses, the pressure mounts on the contestants to wow the judges and win $1 million and a residency in Las Vegas, as each act seems to get larger and better.

Svitlana was born on October 27, 1995, in Kiev, Ukraine. Her love of the stage began at a young age for her. To ensure that her physical ability and desire to be graceful and elegant weren’t lacking, her parents enrolled her in ballet classes at age five after beginning gymnastics at age three. She spent the next eight years with the National Honored Academic Dance Ensemble of Ukraine, PP Virsky, working on her technique, flexibility, endurance, and stage confidence. Svitlana accomplished her aim of becoming a professional artist during those years of schooling.

Her circus career began at the age of 15 after years of ballet instruction, which she completed at the age of 12. She continued her education at the Kiev State Academy of Circus and Variety Arts, where she honed her skills in a variety of disciplines, including acrobatics, aerial gymnastics, dancing, acting, and art improvisation.

No one knows anything about Svitlana Rohozhyna’s family at this time. We’ll notify them as soon as we have more information.

Before she grabbed the chandelier, Rohozhyna began her act with a lovely dance to the song “Rescue” by Lauren Daigle, which she performed in front of an audience. Once in the air, she skillfully spun in circles before taking off her red dress and revealing her gold undergarment.

With her arms swinging from her ankle, Rohozhyna completed the “beautiful,” “elegant,” and “sexy” routine by hanging from the chandelier as she descended from the sky.

“Super proud” was the word used to describe how the audience felt about Rohozhyna’s performance. Judge Simon Cowell called the performance “amazing,” and he applauded the “degree of perfection” with which it was performed.

It’s on to Judge Cuts for the aerialist who received three “yes” votes. The only time an aerialist act has ever won “AGT” was when self-taught adolescent Aidan Bryant came in second to magician Dustin Tavella.

After years of ballet training, which she completed at the age of 12, she embarked on a career in the circus at the age of 15. At the Kiev State Academy of Circus and Variety Arts, she studied a variety of disciplines, including acrobatics, aerial gymnastics, dancing, acting, and art improvisation.

Also, Rohozhyna has been in numerous shows, including X Factor and So You Think You Can Dance, Ukraine, as well as international performances, including Circus Dziva, and Waiblinger Weihnachtscircus, Tui Cruises, WOW Show, Buddha Bar Show, and La Bouche. The Show.

It’s still off-limits to the general public. We’ll let you know as soon as we have more information.

With famous with AGT Audition most people tend to search for Svitlana Rohozhyna’s nude, sexy and naked photos. But she is a decent girl and also you can find some hot and sexy photos on her Instagram profile.

Where is Svitlana Rohozhyna from?

Svitlana, who now resides in Las Vegas, is originally from Ukraine.

How old is Svitlana Rohozhyna?

What is Svitlana Rohozhyna real name?

Svitlana Rohozhyna is her real name.

What Happened to Jonathan Goodwin after AGT 2020? Here are some quick facts.