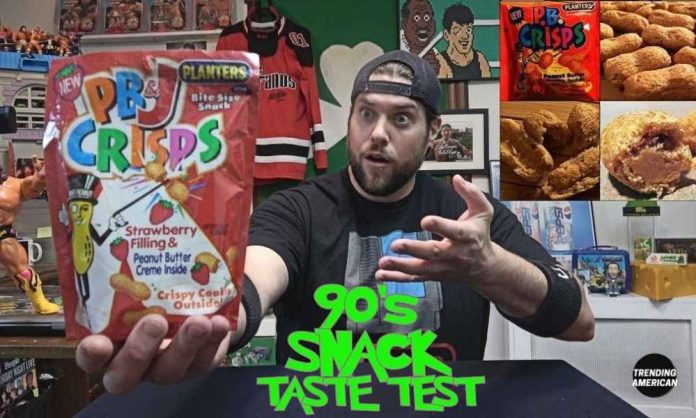 Kevin Thomas Strahle is the person behind the Skippy62able Youtube Channel. He is better known as L.A.Beast.

Kevin is a professional competitive eater. He does insane food challenge videos on his channel, Skippy62able. His fondness for food brought him a lot of fame.

Do you want to know how L.A.Beast became a YouTuber with 10 Guinness World Records? In this article, let’s find out how he did it, his early Life, and his latest news.

In writing this article, we have used resources from Wikipedia, youtubers.me, and data we gathered from his social media profiles.

Kevin Strahle was born on January 6, 1984, which makes him 38 years old. He was born in Ridgewood, New Jersey.

He’s loved food since he was a child. He even used to steal his friend’s food because he always felt hungry.

The one person who and really helped develop my eating skills early on was my grandmother. She always used to come over and make me eat and eat and eat until I exploded.

Kevin used his natural bulk to join the football team at Ridgewood highschool. Then Kevin played football for Fordham Rams of Fordham University. He graduated in 2006. Then he worked as a sales agent at Budweiser.

In 2008, Kevin moved to Los Angeles and started working for Pepsi. He quit his minimum-wage job two years later. He moved in with his parents and rejoined Budweiser. Then he started to make Youtube videos on the weekend.

He partook in food challenges even before he started the Skippy62able Channel. The first challenge he ever did was the Fatburger XXXL challenge.

L.A Beast’s mother was a teacher. His father worked for Pepsi. He has three sisters.

Talking about his relationship status, he has a Partner. Kevin posted a few pictures with his partner in January 2019. According to those posts, her name is Britney Nicole Apples.

Did you know that L.A.Beast has set several Guinness world records?

In 2017 he finished the most ghost peppers in two minutes. He also ate the highest amount of chicken nuggets in just three minutes. L.A.Beast ate 642 grams of nuggets and 121 grams of ghost peppers.

A few days later, he set another record. He finished nine donuts within 3 minutes. Then he gulped down a bottle of maple syrup within 11 seconds. Isn’t it insane?

According to guinnessworldrecords.com, Here are some other Records of L.A.Beast.

Another interesting fact about L.A.Beast, he conducted a “Bring Back Crystal Pepsi” movement. According to Wikipedia, he wanted to bring Crystal Pepsi to the shelves Again. The popularity of the movement had 15 billboards placed in Los Angeles.

L.A.Beast even released a song named “The Crystal Pepsi song.” As a result of this movement, Pepsi produced Crystal Pepsi in a limited quantity.

Here’s how the L.A.Beast ate a massive Lasagna in one Bite.

L.A.Beast never fails to impress his fans with his food challenges.

This Lasagna challenge is entertaining as well as funny. We all know that he has a good sense of humor. He has put a lot of effort into making a 180-layer Lasagna.

He finished it within 5 minutes and 52 seconds. We know it’s not easy to wolf down a 180-layer Lasagna. As always, L.A.Beast completed the challenge successfully.

The comments show how his fans enjoy and appreciate his efforts. Whatever he does, he does it with 100% of commitment.

The most viewed video on the Skippy62able channel has 19M views. It’s “Enjoying a 20-year-old Crystal Pepsi.” It was posted on February 13, 2013. Almost a decade ago.

L.A.Beast buys a 20-year-old Crystal Pepsi from eBay. He gulps it down. A few minutes later, he Vomits. We could imagine what mess it might’ve caused in his stomach.

The birth of the channel Skippy62able.

After his first challenge, he did the Milk chugging challenge. His friend Lee decided to record it just for fun. Then he posted it on YouTube. This video was the beginning of the Skippy62able YouTube channel.

He was featured on MTV and truTV as well. Gradually he began to gain popularity. In 2011 Kevin Strahle began to refer to himself as L.A.Beast.

Currently, L.A.Beast has about 2.79M subscribers. He has posted 416 videos.

According to worthpedia.com, as of 2022, L.A.Beasts’s Net Worth is about $5M. These are just estimated numbers. This Networth could be more or Less.

L.A Beast is a Skillful competitive eater. His commitment is the secret to the success of his Skippy62able Youtube channel. He gives the best to his fans with his great sense of humor. It’s so entertaining to watch his videos.

What is L.A.Beast’s Net Worth

What is the real name of L.A.Beast?

How many Guinness world records does L.A.Beast have?

He has about ten records.

How much makes Matt Stonie from YouTube? Here is all you...