HomeAGTWhat Happened to Cristina Rae after AGT 2020? Here are some quick...
AGTAGT 2020

What Happened to Cristina Rae after AGT 2020? Here are some quick facts. 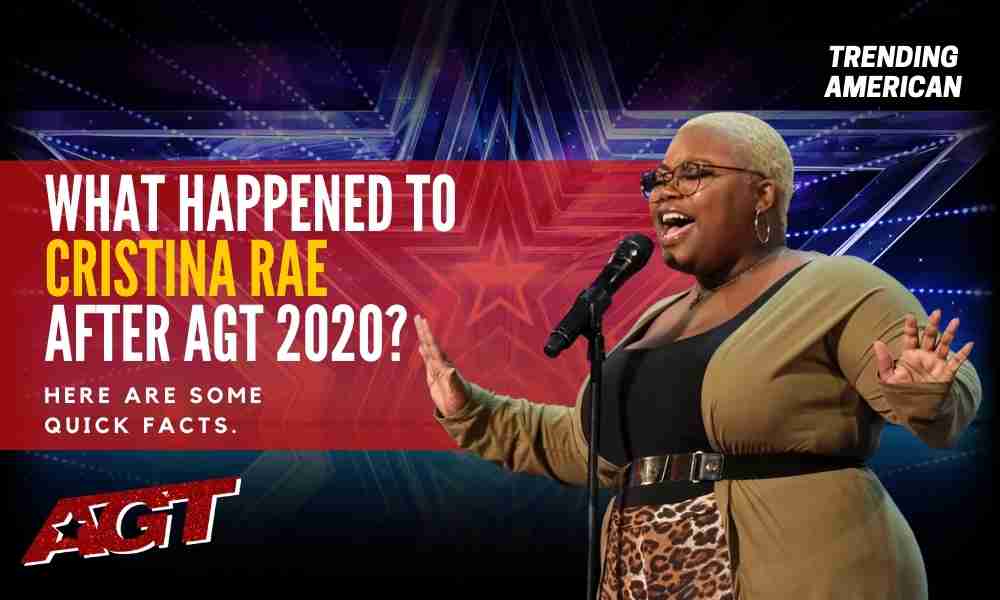 Cristina Rae is a dedicated lady who passed several tough years to follow her career with a four-year-old son. She won the Golden Buzzer from Heidi Clum after doing two nervous performances in her audition. With high praises from all judges and votes from fans, singer Cristina had a long life in America’s Got Talent Season Fifteen. Here are some quick facts about Cristina Rae.

Cristina Rae participated in the Americas Got Talent on 2020. She got eliminated from the semi finals.

Cristina’s full name is Cristina Rae. Her birthplace is Nashville, Tennessee, and also still lives there. But at last, she moved to Atlanta to have better opportunities to expand her career. She is an American. Rae is 178cm tall. Her birth year is 7th February 1988. Now she is 34 years of age. She went to the Nashville School of the Arts. Then graduated from Tennessee State University. Her ethnicity is black.

She had a lot of tough periods in her career. AGT Cristina did not have a home while she was pregnant. Then she lived in her car. Then she stayed with an aunt in Georgia. Now Rae is a professional singer, songwriter, and actress. Her main dream was to purchase a home for herself and her son to live freely as they wants.

What is Cristina Rae doing now?

AGT singer Cristina Rae works as a professional singer and performer in the United States. Now she receives so many invitations from famous musical events and shows to be on the stage as the ladies’ vocalist. She will perform next 13th August on the Live Music and poetry show in Nashville as the main vocalist.

There is nothing about her parents. Cristina didn’t reveal whether she is married or not. But she had a relationship with Don Lewis. Cristina has not told more about her ex-partner. AGT Singer Cristina Rae’s son’s name is Jeremiah. Her son, Jeremiah is 4 years old s of 2022. Jeremiah just started his school career 6 days before. He attends Kindergarten school.

What happened to Cristina Rae on American’s Got Talent?

Cristina made her debut audition on AGT in episode 1503. She had to sing two songs as Simon did not satisfy with her first song. In her second chance, she sang, “ Gimme Shelter” by The Rolling Stones. She earned a standing ovation from the judges as she impressed them a lot. Surprisingly, Heidi Klum pressed her Golden Buzzer sending Cristina straight to the Quarterfinals.

She performed Leonard Cohen’s “Hallelujah” for the quarterfinals. Cristina earned a standing ovation from three judges except Simon. AGT Cristina received enough votes to advance to the semifinals instead of Annie Jones and Sheldon Riley.

She performed her semifinal performance in Episode 1519. Cristina sang “Jump” from the movie STEP. Rae received a standing ovation from Heidi Klum. Eventually, she had enough votes to select the finals instead of Celina.

Cristina did a fantastic performance in the finals in Episode 1521. AGT singer Cristina sand Imagine Dragons’ “Demons.” For the finale in episode 1522, Rae sang “Lose Somebody” with Ryan Tedder of OneRepublic. She got enough votes to advance to the Top 5 of AGT Season 15 by defeating Daneliaya Tuleshova. Cristina Rae AGT finished the competition in 3rd place.

No, Singer Cristina Rae did not win the AGT season 15. She won 3rd place in the competition ahead of Roberta Battaglia and Alan Silva and behind Brandon Leake and Broken Roots.

Cristina attended Salama Urban Ministries from age 7 to 23. There she learned acting, singing, and dancing. Then she attends the Blair School of Music and Nashville School of the Arts. Before debuting on AGT, Rae got the chance to perform at the infamous Apollo Theater, in New York. AGT Cristina has appeared in off-Broadway productions like Queen of Hearts by the New York-based company. She has already released her first single, “ Unconditional” through all major streaming platforms.

You can watch every single performance of Cristina’s on AGT through YouTube. The debut audition that she won the Golden Buzzer has over 590K views on YouTube. She has her own YouTube channel with 3.96K subscribers. Cristina used her YouTube channel to release her singles and official videos. One of her singles called “I AM” has over 5.8K views.

She used her Facebook page to publish her upcoming shows and events to update her fans. Rae has gathered over 20K followers on Facebook. Her Email address is [email protected]. Cristina Rae singer has more than 34K followers on Instagram. She has already dropped 468 posts to it.

There are no exact figures on her net worth. But AGT Cristina’s estimated net worth comes to around $ 300K to 400K. She accumulated her net worth by performing as a vocalist and performer. Also, she earned a reasonable income by working with off-broadway productions with a New York-based company.

Although most of Cristina’s facts are in this article, there is nothing much about her family and her son’s father. There is no evidence of her marriage. It is clear that Cristina faces a lot of difficulties in explaining to her family as she follows a non-traditional career. Cristina is the highest placing vocalist in AGT history after being stopped by Simon Cowell in her audition.

There is no exact information about Cristina Rae’s marital status though she had a 4 years old son.

Where is Cristina Rae now?

Cristina Rae is from Nashville, Tennessee

also read: What Happened to Steve Royle after BGT 2020? Here are some quick facts.

The Brown Brothers AGT 2022 + Net worth and Facts

What Happened to King Charles Unicycle Troupe after AGT 2006? Here...