HomeYoutubersWho is the man behind David's Been Here YouTube channel?
Youtubers

Who is the man behind David’s Been Here YouTube channel? 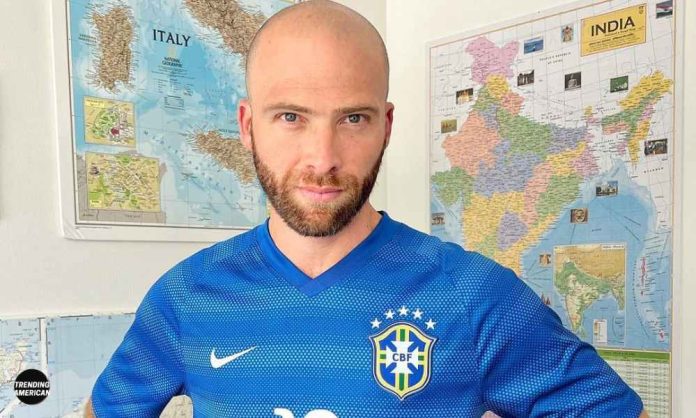 David Hoffman is the man behind David’s Been Here YouTube channel.

He is a man who makes his passion into a full-time job; his interest in traveling, experiencing various foods, and exploring cultures have made him a well-known YouTuber. He said the best thing he earned was “people’s trust.”

David is an explorer who shares his experiences, which he gathered from traveling around the world, through his YouTube channel, “David’s Been Here .”

His major focus is on unique food, culture, and history. Besides, his slogan runs as: “Leave your mark on the world .”Hoffman brings out authentic events that he faced during his journeys. He does not merely display them; instead, he encourages travelers to explore the world.

My name is David Hoffmann and for the last decade I have been traveling around the world in search of unique culture, food and history!

I live in Miami, Florida with my wife and daughters. Since starting Davidsbeenhere in 2008, I have traveled to 90 countries and over 1,300 destinations, which I welcome you to check out on my YouTube Channel, blog and social medias.

I focus a great deal on food and historic sites, as you probably have seen! I love to experience the different flavors that each destination has to offer, whether it’s casual Street food or gourmet restaurant dining. I’m also passionate about learning the local history and culture.

How much is David’s Been Here net worth?

As estimated, David Hoffman has a net worth of about $674.55 thousand. Since he has additional sources of income, his exact net worth needs to be clarified.

Behind “the well-known Youtuber, David Hoffman,” there is an ordinary David Hoffman who was a beginner. At 23, he started his YouTube channel out of college, “DavidsBeenHere.”

He is a Miami boy born on September 4, 1985. He says the trip to his mom’s family in Gubbio “was the most incredible cultural experience .” That trip made him realize that his “life wouldn’t be complete if travel wasn’t a big part of it.”

That cultural hybridity he experienced aroused his curiosity to explore new destinations worldwide.

Hoffmann was born to Venezuelan parents of Italian and Hungarian descent. Since then, he has been exposed to a diversified culture. There is only a little information exposed about his family. Still, within his feed, he had shared a video featuring his family members.

Hoffman is married to Ana Lambrakopoulos, and they have two daughters. He has shared some videos and collaborated with his wife throughout his content.

David Hoffmann is a man who gave life to his passion by making it his full-time job. His channel, DavidsBeenHere, displays his versatile personality as a YouTube star, travel blogger, digital content creator, social media personality, vlogger, food blogger, and entrepreneur.

David’s Been Here is a digital media company that gives reliable first-hand information and entertainment while inspiring travelers to leave their mark on the world. It receives around 92,000 monthly page visits from more than 80 different countries.

He travels to many unique destinations worldwide, displaying an authentic reflection of the different flavors of each destination in the appearance of culture, food, and history. Even so, a Miami boy lives within his heart.

He never forgets to bring out the marvels of his hometown Miami, South Florida, USA, in his work.

Hoffmann has received numerous accolades since starting his channel, including recognition as one of USA Today’s Top 10 Best Travel Videographers and the world’s Top 10 Travel Video Sites. Additionally, in 2020, he received the Travel Video Alliance Award for Best Culinary Video.

He joined YouTube on July 25, 2008, and he has over 240 million views up to November 2022. His channel has grown up to 1.07M subscribers. In the summer of 2017, Hoffmann rebranded his YouTube channel into a trip vlog channel.

Firstly, he started sharing his stories and travel trips through Facebook. Currently, he has 180k followers on Facebook.

By now, David Hoffmann has 210k followers on his Instagram profile and has posted 4,064 posts.

What is David Hoffman’s nationality?

Hoffmann is an American.

How old is Davis’s Been Here?

Where is David’s Been Here from?

He lives in Miami, Florida, USA.

Here is Everything you need to know about Rosie Maio