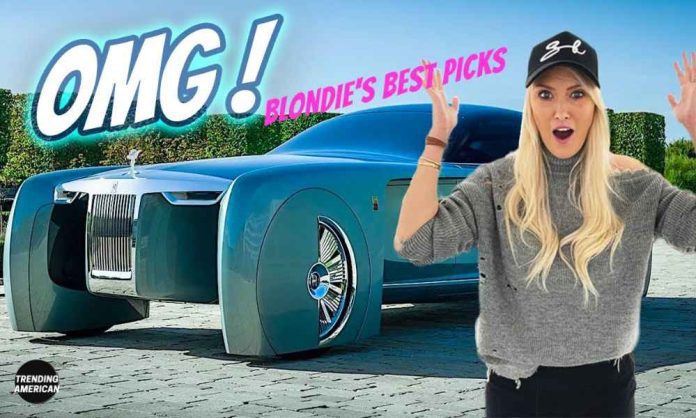 Futuristic cars are impressive and advanced in every aspect. Needless to say that Supercar Blondie is the best person to review those.

Technological advancement has paved the way for exclusive futuristic cars. Renowned companies are creating the next generation of the automobile industry.

Supercar Blondie says Rolls Royce Ghost has a 6.75-litre twin-turbo V12 engine. It pumps out about 530hp. According to carindigo.com, the car hits 60 mph within 4.8 seconds. The Rolls Royce Ghost also has a celestial interior.

This car is the replica of the Batmobile in the Dawn of Justice movie.

According to Sergi, It has a supercharged Ford F350 raptor engine. The body is made of fiberglass and carbon fiber. It also has massive wheels (500 kg each).

According to lamborghini.com, The V12 Vision has the same powertrain as the FKP37. It has a large wing housing a Y-taillight dominating the rear. The major driving controls are in the Futuristic steering wheel.

Supercar Blondie says that this futuristic car is for 2035. The roof opens high enough so one can get in standing. Rolls Royce 103EX doesn’t have a steering wheel. It is a fully electric futuristic car.

Supercar Blondie says this is one of the most advanced concept cars.

According to Renault.co.ke, It has a fully electric Renault TREZOR Concept engine. This Concept engine has a power of 260 KW. It’s equal to 350hp.

The designer of the

Renault Trezor is a design of Laurens Van Den Acker. Renault unveiled the Trezor at the 2016 Paris Motor Show.

The concept car, the Mercedes Maybach Off-Roader, has a very Luxurious look. The bonnet of the Mayback Off-Roader has solar cells with the Maybach emblem.

The Maybach Off-Roader is a part of the Maybach project. This is a design by Mercedes and the designer Virgil Abloh.

According to BMW.lc, the BMW Vision Next 100 is fully autonomous. The manufacturers have used reflective glass panes. It is to increase the passenger’s privacy and reduce interior heating.

Check out Supercar Blondie’s video to see the reptile-looking skin that moves.

According to hotcars.com, The Rolls Royce 6*6 Phantom has V12 engines. It delivers about 453hp. It also rolls on massive 24-inch wheels. This vehicle is a creation of Alexandre Danton.

The Rolls Royce 6*6 Phantom would cost about $5.2 million.

Check out Supercar Blondie’s video to admire the exterior of this beast.

The Lincoln 100 is a fully electric and autonomous vehicle. Supercar Blondie says the design is meant to be as aerodynamic as possible. The whole floor of the car is a screen. The car looks super futuristic.

This futuristic car has a moving steering wheel. It has fully autonomous driving as well.

Supercar Blondie is the first person in the world to drive this concept car.

The Mercedes AVTR has a combined engine power of more than 350 kW. It also has a powerful and compact high-voltage battery.

This concept vehicle has a reptile-like appearance in its movement.

Ds X E Tense is an asymmetrical car by DS Automobiles. Supercar Blondie says she’s never seen such a car. It has a glass floor where you can see the road. It’s Fully electric and pumps out about 402hp.

According to peterson.org, this car is inspired by the Lamborghini Countach. The Lo-Res car has a Polygonal shaped body. It has an Electric engine with a max speed of only 31 mph.

Check out Supercar Blondie’s surprise to Jeffree Star with a Lo-Res car.

Bentley Motors say that this car is 5.8 meters long. It has massive 25-inch wheels. The EXP 100GT is fully autonomous.

Supercar Blondie says the AMG 6*6 is one of the rarest and most expensive Mercedes. It allows you to deflate and inflate the tires within seconds. The car pumps out 540 HP. It costs more than $800,000.

16. The BMW Vision I circular

Supercar Blondie says this concept car is made of Recycled materials. This is a fully electric, four-seater vehicle. The interior looks super futuristic.

Axinom Palladium is the world’s first hyper SUV. The SUV is 2 meters in height and almost 6 meters long. It has 22-inch Tires.

Palladium has a 5.7-litre V8 Biturbo engine. It delivers more than 700 hp.

The manufacturer is Aznom automotive from Italy. It cost about $ 1.5 million.

This Maybach classic in its design, says Supercar Blondie.

Supercar Blondie introduces us to the best futuristic cars. The features, exterior, and Interior of the vehicles are super futuristic. All the renowned brands have come up with unique and creative concepts.

How much does the Rolls Royce ghost cost?

What is the world’s first Hyper SUV?

Which futuristic car has a screen floor?

Is the Interior of the Volkswagen ID Buggy waterproof?

What is the name of the car Supercar Blondie takes to surprise Jeffree Star?

It is the Lo-Res Car.

Who designed the Renault Trezor?

Laurens Van Den Acker is the designer of the Renault Trezor.

How much does Supercar Blondie earn per month by being the top-viewed car reviewer on social media?